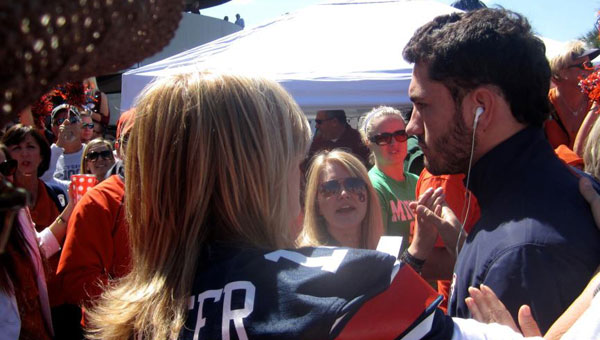 Former Briarwood Christian School quarterback Barrett Trotter, a junior in his first season as the starter at Auburn University, proved a time-tested fact once again Oct. 1.

Trotter’s effort confirmed great teams don’t need a Heisman Trophy candidate directing the offense to beat a top-ranked opponent on the road in the Southeastern Conference.

Trotter, in the mold of a game manager seen on a pair of recent National Championship teams from the SEC, managed the clock and kept his offense moving for the most part in another comeback victory, this time a 16-13 win in the final minutes over No. 10 South Carolina on the road in Columbia, S.C.

Auburn coach Gene Chizik said he felt the offense began to carve out an identity in the win over the Gamecocks.

“I told them at halftime that I could see the tree falling,” Chizik said. “We’ve just got to keep chopping wood. I knew that at one point, offensively, we would make that tree fall.”

Trotter helped the Tigers extend their SEC winning streak to 11 games over the past two years.

Trotter relied heavily on running backs Michael Dyer and Ontario McCaleb, while mixing in a game-clinching touchdown pass with 1:38 remaining to tight end Philip Lutzenkirchen, as the Tigers ate up the clock throughout their first conference victory. He also stepped  to the sideline and let freshman Khiel Frazier provide a change of pace with his running ability on occasion in the victory.

Auburn (4-1) possessed the ball twice as long as the Gamecocks and ran nearly 40 more offensive plays than the home team in the win. The Tigers outgained the Gamecocks 358 yards to 289 yards, offensively.

Trotter outshined his counterpart, the Gamecocks’ three-year starter in senior Stephen Garcia, who completed only 9-of-23 passes and threw two interceptions in the game.

Trotter faked a hand off in the backfield and nailed Lutzenkirchen cutting across to the left side of the field inside the Gamecocks’ 5-yard line in a play similar to the one Auburn ran to cap a comeback win over rival Alabama in the Iron Bowl a year ago. Lutzenkirchen fumbled the ball into the end zone but recovered it just before sliding out of bounds.

Trotter completed 12-of-23 passes for 112 yards with a touchdown and two interceptions in the win. The touchdown pass to Lutzenkirchen made up for a couple of mistakes in the second half, including an interception in the back of the end zone in the fourth quarter.

Dyer carried the Tigers as he led Auburn with 141 rushing yards and a touchdown on 41 carries.

Former Pelham High School standout Jake Holland, the Tigers’ starting middle linebacker, finished second on the team with six tackles and forced one fumble in the victory. Holland and his defensive teammates helped limit South Carolina running back Marcus Lattimore to a season-low 66 rushing yards and one touchdown on 17 carries.

Chizik said the Tigers took a step forward defensively after struggling at times in the first four games of the season.

“My hat’s off to our defensive coaches and players,” Chizik said. “What an incredible night for those guys. I could not be more proud of them. They needed this, especially against a great running back and a great team. This is a great start.”

The road doesn’t get any easier for Trotter and Holland in their first season as starters. Auburn faces another road game Oct. 8 at ranked foe Arkansas before hosting Florida the next week.

FROM STAFF REPORTS The University of Montevallo volleyball team swept Lander University on the road Sept. 30. The Falcons (6-10... read more