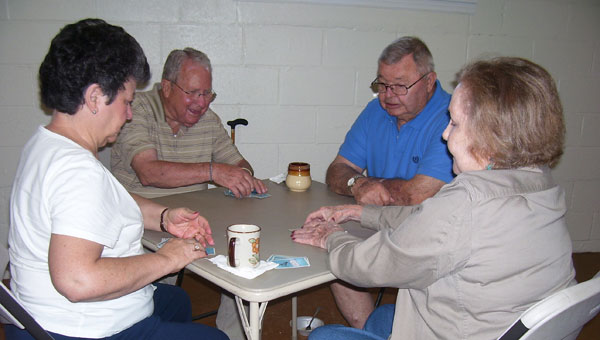 George Stewart, center left, appears delighted with his Rook hand, while his opponent Gene Mathews doesn’t seem very thrilled with his (or is that a “poker” face?). Waiting for the first bid is Mathews’ partner Jackie Boulware, far right, and Joyce Blackerby, far left. (Contributed)

Some 20 people were already at the Chelsea Adult Lodge playing Rook, Dominoes or Phase 10 when I arrived a little before 10 a.m. on a recent Thursday.

“Some people began playing games by 9:30,” Tom Boaz told me.

“And if you come early, by 9, you may be lucky enough to get a homemade biscuit and milk gravy, made by Martha Smith and Tom Boaz,” said Jean Tate. Someone else said Herb Buchanan helps with breakfast when Martha doesn’t.

“And coffee is always ready and hot,” Jean added.

Barbara Boaz said it would be difficult to say what the favorite dish is at lunchtime, but some of the favorites seem to be Esther Chesser’s chicken and dumplings, Jackie Boulware’s banana cake and her own broccoli cornbread.

“Everyone brings a dish of their choice,” Jean said. “Good country cooking by the best cooks in Chelsea with years of experience.”

Doesn’t it make you hungry, just thinking about it?

The most popular game, the day I went over, appeared to be Rook. Barbara Boaz said that 90-year-old George Stewart always wants to play Rook, but several other people seemed to be enjoying it, too, along with Mexican Dominoes.

“Everyone is so helpful,” said Jean. “If you do not know how to play, all are ready to help.”

Tom and Barbara Boaz serve as leaders for the group of seniors who meet each Thursday at the Lodge on Road 36. They generally have between 20 and 30 people. Some have lived here for most of their lives, others are new to the community.

Although the Tates have lived in Chelsea for many years, Jean Tate said that she and husband James are fairly new to the group at the lodge. They have been coming only about three months, whereas Bette Swann has been coming for three years.

“But once we came, we were hooked… There are plenty of hugs and smiles that erase all our aches and pains and we can’t wait to come back. It’s a very special place to be on Thursday from 9 a.m. till 1 p.m. Drop in anytime during these hours, ” she said.

I hope to do just that, when I can stay longer to try Esther’s chicken and dumplings and play Phase 10.

“God gave me such a love for His Word through these people,” said Sue Ingram, who uses Bible character dolls... read more