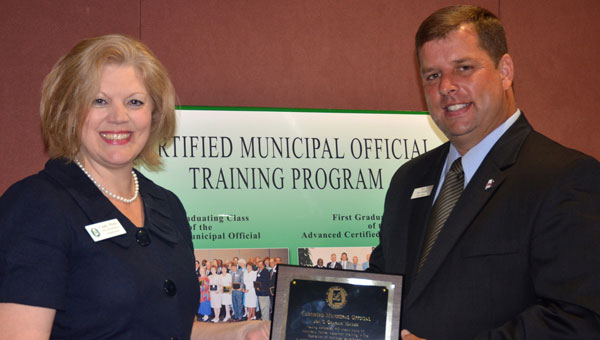 Cindy Price of the Alabama League of Municipalities presented a Certified Municipal Official plaque to Mayor Jon Graham in a graduation ceremony held in Montgomery on Aug. 18. (Contributed)

The Alabama League of Municipalities was organized in 1935 and has served since that time as the recognized voice of the cities and towns of Alabama.

The primary purpose of the league is to promote understanding of municipal government and administration in Alabama, thereby advancing the welfare of the people of this state. The voluntary membership brings officials of the cities and towns together in fellowship of public service, which strengthens and guides local government in a progressive, responsible fashion.

In 1994 the Alabama League of Municipalities began a training program for elected municipal officials who wished to receive formal training in municipal government.

He was recognized for his accomplishment during graduation ceremonies held in Montgomery on Aug. 18 where he received the professional designation of Certified Municipal Official.

Ken Smith, executive director of the League of Municipalities, said citizens of Calera should be proud of Graham’s achievement.

“He spent many hours during the last several years attending day-long workshops and lectures on the finer points of municipal government. Mayor Jon G. Graham is to be commended for his motivation to become a better municipal official and for his diligent attendance during these training session,” Smith said.

Graham’s commitment to integrity led him to complete the training.

“I’m conscience about what I do as mayor and in my own private life,” he said. “I don’t want to do anything that is detrimental to the city.”

Graham plans to attend the advanced certified official course offered by the league. “This is an additional 40 hours of training above what I have currently. The program is in place to keep municipal officials involved with each other. It puts me in touch with other officials who have similar challenges and ideas, and we have round table discussions about those topics.”

The league is a tremendous resource for the city.

Graham hopes council members will consider taking advantage of it.

Emma Krueger helps a shopper at the spring clothing give-away held at the National Guard Armory in Calera. (Contributed) By... read more