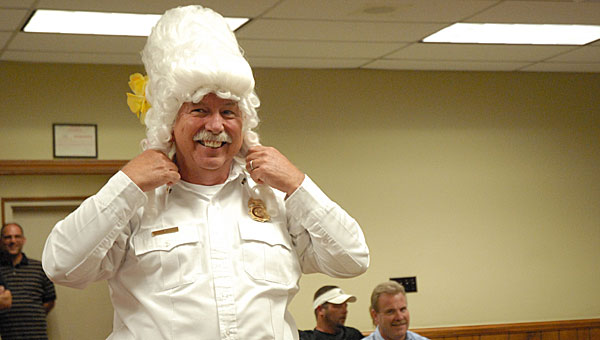 Pelham Fire Chief Danny Ray adorned a nearly 2-foot-tall white women’s wig Oct. 3 at Pelham City Hall as the owners of Grebel Dance announced he would be the next Pelham public official to serve as Mother Ginger in the studio’s production of the Nutcracker.

Each year, Grebel Dance selects a male Pelham public figure and casts him as Mother Ginger during the annual production, which will be held Dec. 10-11 at the Pelham High School auditorium.

As Mother Ginger, Ray will dance onto the Sugar Plum Fairy’s court and open his vast skirt to reveal eight gingerbread children who will dance around him.

“That was such a fun thing last year,” Crandall said. “I spend a lot of time around those ball fields, but I have to say the kids in that show put in more time than kids do playing ball.”

Murphy said Ray was reluctant to accept the role initially, but warmed up to the idea after learning more about it.

“When I said ‘You’re doing it for the kids,’ he was all aboard,” Murphy said with a laugh. “You better get acquainted with that wig, chief.”

“If you’ve never seen it, the show is absolutely as good as anything I’ve seen elsewhere,” Rice said.

Grebel Dance Executive Director Deborah Grebel said she enjoys the tradition of naming Mother Ginger each year, and said Crandall, Waters and Murphy have done well filling the role in the past.

“It’s such an exciting event when the kids get excited about it,” Grebel said.