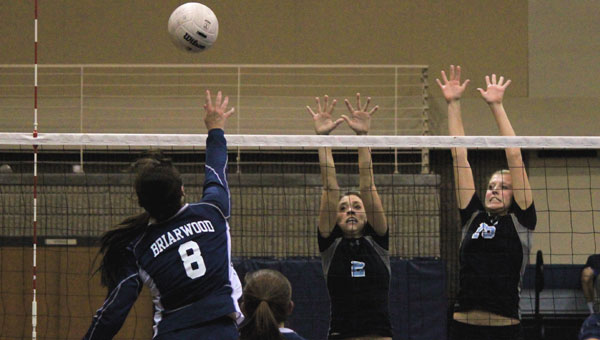 NORTH SHELBY — It was an emotional night for the Briarwood Christian School volleyball team as its seniors Logan Nasworthy and Carly Cline took the court at home for the last time Oct. 4. The pair defended it well, helping the Lions to a 25-13, 13-25, 25-19, 25-23 win over the Spain Park Jaguars.

“It was a happy moment for us,” Cline said. “It was sad because I am a senior, and this is my last year, but I’m really happy to be on this team.”

The Lions (19-17) took a dominating 23-11 lead in the first set following a Cline kill and five service aces from Lizzie Baumbach. A Jaguar attempt to rally was quickly shut down with a game-winning service ace from Georgia Muir-Taylor.

“First set, my goodness, we came out like gangbusters,” Briarwood head coach Tien Le said. “Then typical of us being young, we kind of let our foot off the gas and let them come back, but you have to give it to Spain Park — they kept fighting.”

The Jaguars quickly snatched control of the second set, never trailing to Briarwood. Three service aces from Brooklyn Hall and three kills from Kylie Beaubien helped Spain Park to 10 unanswered points midway through the set as the Jaguars evened the match tally with a 25-13 win.

“I’m proud of the match tonight,” Spain Park head coach Paula Dill said. “I think we were much more competitve than what I’ve seen in the last couple of weeks.”

Two late service aces and a kill from Nasworthy paired with a tip from Adeline Reiser helped the Lions snag the third set, but the Jaguars weren’t about to go down without a fight.

The fourth set proved a fight to the death as Spain Park clawed its way to a 19-18 lead late in the set off of a ruthless Beaubien kill. The Lions clinched a 24-19 lead as a result of kills from Nasworthy and Cline, two service aces from Baumbach and a block by Muir-Taylor. Two Beaubien kills and a Hall service ace brought the Jaguars within two points of victory, but Nasworthy wasn’t going to let that happen in her house.

Nasworthy went out with a bang — literally —  clinching the victory for her team with a solid kill.

“I just really love this team, and they have made it best year ever,” a teary-eyed Nasworthy said. “Communication was key this game and being consistent, getting our serves, being ready to play the ball. I think we just stayed more focused and played our game.”

Cline and Baumbach had 10 digs each and Nasworthy, who racked up a team-high 14 kills, and Hope Don0hue each added eight digs. Reiser led the team with 24 kills. Baumbach also led the team with eight service aces, and Muir-Taylor added five.

Both teams will participate in their respective area tournaments Oct. 11.