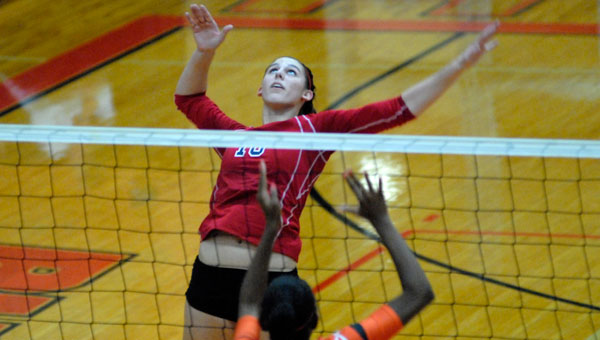 HOOVER — The Oak Mountain High School volleyball team forced a three-way tie for the Alabama High School Athletic Association Class 6A, Area 10 regular season championship following a 23-25, 25-22, 25-23, 26-24 win over Hoover on the road in the Eagles’ final area match of the season Oct. 4.

The Eagles finished in a tie with Pelham and Hoover for the top spot with identical 4-2 area records. Oak Mountain earned the right to host the Class 6A, Area 10 tournament due to a complicated tiebreaker that came down to the total games won against their area foes.

Junior Hannah Kowal led the Eagles (17-7) with 13 kills in the victory. Kowal also recorded 13 digs, one assist and one block. Senior Abbi Bourque also posted 13 kills in the win.

Oak Mountain stormed back after dropping the first set to the Bucs, 25-23. Following a 25-22 win in the second set and a 25-23 win in the third game, the two teams battled back-and-forth throughout the fourth and final set.

Cosgrove broke a 23-23 tie with her kill off an assist by Beach to give the Eagles a one-point advantage late in the set. Oak Mountain claimed the match after back-to-back errors by Hoover for its final two points.