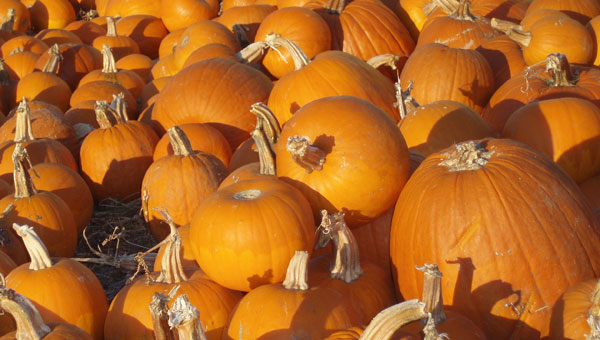 The First Presbyterian Church of Alabaster recently kicked off its 2011 pumpkin patch. All proceeds from pumpkin sales will be donated to SafeHouse of Shelby County and the Harvest Youth Center in Madison County. (Contributed)

Every year in late September, rows and rows of bright orange globes seemingly sprout from the grounds of one of Alabaster’s oldest churches, marking the beginning of a longtime community tradition.

As cooler temperatures blanket the area, members of the First Presbyterian Church of Alabaster welcomes fall by surrounding the southern and western side of their church building with thousands of pumpkins of nearly every shape and size imaginable.

“I’ve been here for eight years now, and it was something that had been going for a long time when I got here,” said church pastor Rev. Mark Davenport. “It’s something we do every year to provide specific aid to someone in need.”

On the last weekend in September, church volunteers formed a “human conveyor belt” as they unloaded 3,000 pumpkins delivered by the Pumpkin Patch fundraiser organization, Davenport said.

Because the church has been working with the Pumpkin Patch organization for many years, Davenport said the church typically has a “standing order” of a few thousand pumpkins every year.

After the organization trucks the load of pumpkins to the church, First Presbyterian members work to organize them into various arrangements on the church grounds.

“We’ve got some folks who will bring some fall decorations and set them up in the pumpkin patch. It ends up looking great every year,” Davenport said. “By doing that, it gives us a chance to be together as a faith community.”

The pumpkin patch also brings the Alabaster community together, as Davenport said he fields questions throughout the year about the event.

“It’s a really neat thing. I can’t tell you how many conversations I’ve had where I will be at a ballgame or a restaurant and people will ask me what I do,” Davenport said. “When I tell them I’m the pastor of First Presbyterian Church, more than likely they’ll say ‘Oh, that’s the pumpkin patch church.’

“It’s a neat way we are able to connect with the community,” Davenport added.

After the pumpkins are set up, church volunteers man the patch for nine hours a day throughout the month. The patch will operate until Oct. 31 from 11 a.m.-8 p.m. each day at the church, which is located at 8828 Alabama 119 in Alabaster.

All pumpkins in the pumpkin patch are for sale, and all proceeds will be donated to SafeHouse of Shelby County and the Harvest Youth Center in Madison County.

“We don’t keep one thin dime. We always choose two or three organizations to support through our pumpkin patch,” Davenport said. “SafeHouse is one of our service partners here locally, so we do a lot with them.

“The Harvest Youth Center is still recovering from the April 27 tornadoes,” Davenport added, noting several of the church’s youth spent time volunteering in Harvest over the summer. “A lot of times, people will spend $10 to purchase a pumpkin here that they could get elsewhere for $3 because they know the money is going to those who can’t help themselves.”