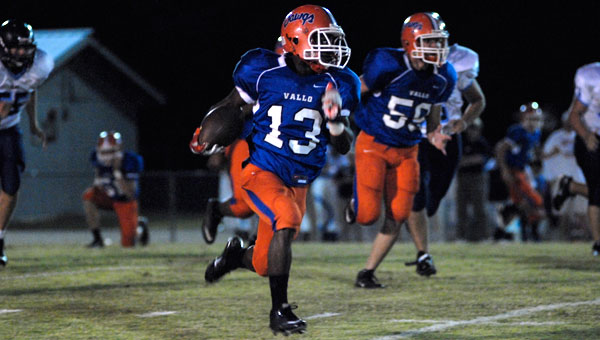 The Bulldogs moved one step closer to a Class 3A playoff berth following its second region win of the season. A win over Gordo or Hale County in the Bulldogs’ final two region games the next two weeks will likely secure a playoff bid in a season where Williams’ team has been hit hard with injuries.

Montevallo (2-4 overall, 2-2 in Class 3A, Region 4) jumped out to a 17-0 lead following the first quarter and didn’t let up against Northside. Senior running back R.J. Scaife rushed for a season-high 190 yards and two touchdowns on only nine carries in the victory.

Fellow senior running back Garrius Chappell also broke the 100-yard rushing mark in the victory and junior Eugene Rodgers rushed for 50 yards as the Bulldogs’ ground attack had its way against a winless Northside squad.

After forcing Northside to punt the ball following a three-and-out on the visitors’ opening possession, the Bulldogs took an early 3-0 lead after a 48-yard field goal attempt by senior kicker Brett Gray split the uprights with 7:21 left in the opening quarter.

Lawley and junior Korey Cunningham nailed the Northside quarterback on the seventh play of the Rams’ ensuing possession, which led to a 42-yard fumble return for a touchdown by Lawley with 4:32 left in the first quarter. Gray added the extra point to push the Bulldogs’ lead to 10-0. Montevallo pushed its lead to 17-0 following a 7-yard touchdown run by Chappell and an extra point by Gray on the final play of the opening quarter.

Montevallo pushed its lead to 30-0 following a 17-yard touchdown run by Scaife and an extra point by Gray with 45 seconds left in the opening half. Talley returned an interception 52 yards for a touchdown two plays later to push the Bulldogs’ lead to 37-0 following Gray’s extra point in the final seconds of the second quarter.

Northside finally got on the scoreboard with a rushing touchdown late in the third quarter. The Bulldogs didn’t waste any time in responding to the Rams’ lone score, with Scaife scampering 50 yards into the end zone on the Bulldogs’ next offensive play. Gray’s extra point, which gave Montevallo a 44-7 lead, accounted for the final point in the game.

Williams said the Bulldogs aren’t focusing on the big picture. He simply wants his players to give their best on every play and let the chips fall where they may.

“We want to play perfect football,” Williams said. “It’s about doing the right thing on every play.”

Oak Mountain High School senior running back Bradley Bostick is wrapped up by a Mountain Brook defender in the Eagles'... read more