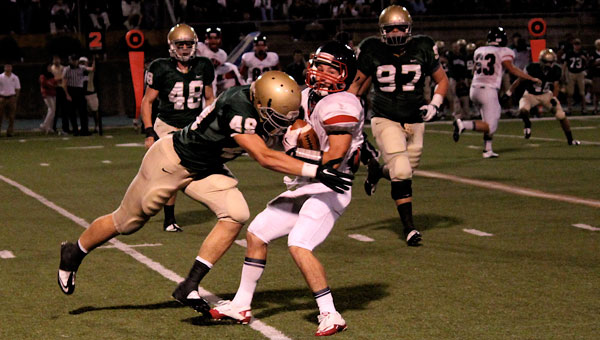 The visiting Eagles were routed by the undefeated Mountain Brook Spartans 38-7 in an AHSAA Class 6A, Region 6 contest Oct. 6.

“Going into this one, we knew we were going to be facing one of the best-coached teams in the state,” Harris said, “that it was going to be very, very difficult to come out here and beat them.”

Oak Mountain (2-5 overall, 1-5 in Class 6A, Region 6) had the first offensive drive of the game, but didn’t get far. Three consecutive three-and-out drives compared to three Mountain Brook scoring drives placed the Eagles in a 21-point deficit minutes into the second quarter.

Oak Mountain recovered a fumble, forced by senior Justin Woodall, with 8:31 remaining in the first half, giving the Eagles the ball at their own 46-yard line, but a Spartan interception set up a 12-play, 71-yard scoring drive that resulted in a 26-yard Mountain Brook field goal, extending the Spartans’ lead to 24-0 to end the half.

But the Eagles weren’t ready to go down without a fight. The Oak Mountain defense forced the Spartans’ first three-and-out drive of the night to start the second half. Three plays later, junior quarterback Jake Adams tossed a quick pass to senior Bradley Bostick, who took the ball 57 yards into the end zone, giving the Eagles their first — and only — scoring drive with 8:57 remaining in the third quarter.

“We noticed they were dropping their corner and bringing up a safety, so we decided we were going to run a screen,” Bostick said. “I saw the safety come down hard, so I cut back to the side of him and  just headed outside. I had two great blocks on the perimeter.”

Maintaining possession of the football proved an issue for the Eagles as the next two Oak Mountain drives ended in turnovers, the second setting up a 2-play, 17-yard final touchdown drive for the Spartans with 11:52 remaining in play.

“Coming in, we really focused on trying to eliminate our mistakes that we’ve been creating the last two to three weeks for ourselves — penalties, turnovers — we worked on elimiating those things,” Harris said. “Obviously, we still had a little bit of that affect us tonight. A lot of that was created by their defense, so my hat’s off to them. They did a great job.”

Oak Mountain’s attempt to throw more points on the board failed as Mountain Brook ran out the clock, clinching a dominating 38-7 win.

“I’m disappointed obviously,” Bostick said. “We didn’t get the win, and it’s something we’ve worked hard for. Sometimes you come up short, and it’s just really frustrating.”

The Spartans kept constant pressure on Adams, who completed only 5-of-22 passing attempts on the night.

“I think the main thing is that these kids are young, and they’re keeping their heads up,” Harris said. “They realize that the big picture is that we’re probably a little bit outmatched in some areas right now, but we’re gonna continue to come and work hard each day, and hopefully, we got better things on the horizon.”