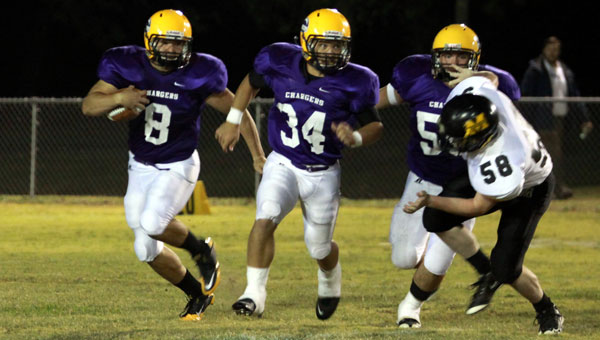 The Chargers took the opening kickoff and marched 58 yards on five plays with Ronezz Stevens taking it in from 19 yards out for the score. Sterling Reither’s PAT gave Cornerstone the early 7-0 lead.

After Meadowview answered with its own score, the Chargers got back to business as Adrian Young scored on a 12-yard quarterback scamper. Reither’s PAT gave the Chargers a 14-7 lead.

Meadowview answered back on its next possession with a touchdown and then recovered a Charger fumble. The Cornerstone defense came up big as the Chargers stopped the Trojans on a goal-line stand before Meadowview missed a field goal. From there on out, it was all Cornerstone Christian.

The Chargers added three more touchdowns in the last three minutes of the half as Auston Wingard scored on an 11-yard touchdown run, Demetrius Conwell returned an interception 64 yards for a touchdown and Young found Chase Payne for a 22-yard touchdown reception to give Cornerstone a commanding 47-13 half-time lead.

Meadowview scored a touchdown on its first possession of the second half on a
50-yard run, but the Charger defense would close the door for the rest of the night. The offense kept churning along as Stevens added his third touchdown of the night on a 25-yard touchdown run.

The Chargers closed out the scoring with a 25-yard touchdown run from Michael Bevard to give Cornerstone the homecoming victory.

Cornerstone coach Tim Smith was pleased with the effort put out by his team.

“We are just trying to get better every week,” Smith said. “Our kids played hard tonight and their effort showed it on the scoreboard.”

Cornerstone gained 540 yards of offense on the night, with 455 of the yards rushing.

Defensively, Clayton Halbert had 13 tackles and Nate Sawyer added 9 tackles. The victory helps the Chargers improve to 4-2 overall and 2-2 in region play.