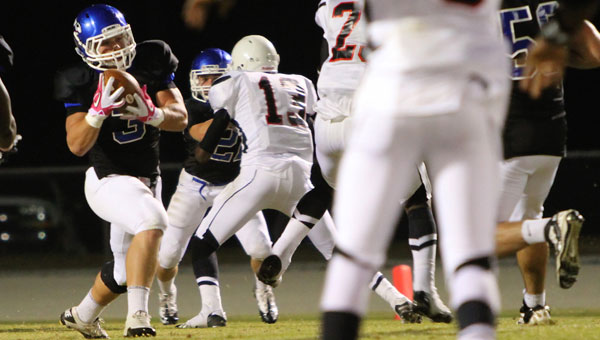 CHELSEA — After keeping the game close for three quarters Oct. 7, the Center Point Eagles owned the fourth quarter and went on to beat the Chelsea Hornets, 33-21.

The Hornets got started quickly behind quarterback Jake Ganus as he lead his team 74 yards down the field before Julius McCall finished the drive off with a 7-yard touchdown run to get the first points on the scoreboard.

The Eagles were quick to answer back as they went six plays down the field to score on a pass from Michael Gilmore to even things back up at 7-7.

It was the defense’s turn to make some plays as Center Point forced an interception on the Hornets’ next drive. Three plays into the Eagles’ drive, Chelsea intercepted a pass to take the ball back. This interception would lead to another Hornet touchdown early in the second quarter with another scoring run by McCall from 10 yards out.

However, Center Point was eager to answer back and get some of the momentum back from the Chelsea sideline.

The Eagles quickly moved the ball down the field on the ground and through the air to the 1-yard line and pushed it in to tie the game at 14-14.

Chelsea answered back with a quick drive of its own to silence the Eagles’ crowd. The Hornets moved the ball methodically downfield 69 yards on eight plays and finally got into the endzone from 3 yards out following Jake Ganus’ first touchdown of the game.

Unfortunately, it would be the last time that Chelsea would see the endzone.

After giving up another touchdown right before halftime, Chelsea went into the locker room with only a one-point lead after blocking the extra point.

The third quarter was all about defense for both teams.

On Center Point’s first drive of the second half, Russ Birdsong came up with a huge interception and returned it to the 20-yard line. Six plays later, the Eagles forced another turnover to stop Chelsea from taking the lead. Center Point drove all the way down to the Chelsea’s 2-yard line and coughed the ball up and the Hornets recovered.

But the Eagle defense held strong and forced a punt from deep in their end zone. When Center Point got the ball back, it took four plays and they were back in the end zone to take a 26-21 lead after failing to convert a two-point conversion.

Chelsea was forced to punt on their next drive, which led to another long Center Point drive as the Eagles took most of the time off the clock and scored to take a 33-21 lead over the Hornets.

With a little over five minutes left in the game, incomplete passes hurt Chelsea as it turned the ball over on downs and Center Point was able to run most of the time off the clock to seal the victory.

“(Center Point) did a good job of adjusting to what we were doing in the first half,” said Chelsea coach Wade Waldrop. “We’ve got some things to improve on for sure.”

Chelsea moves to 4-3 on the season, including 2-3 in Class 5A, Region 5 play. The Hornets will head on the road next week to Talladega for another Region 5 matchup.