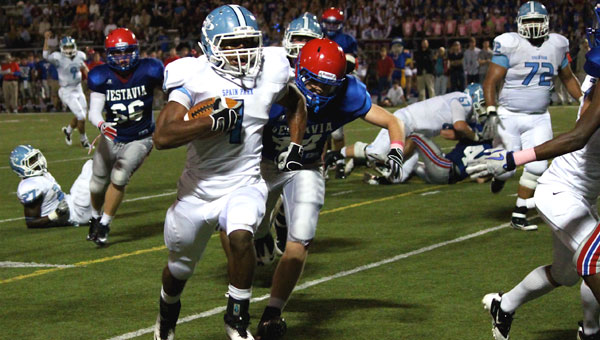 VESTAVIA HILLS — There was no doubt in Spain Park head football coach Chip Lindsey’s mind what lost the game for his Jaguars Oct. 7.

“Turnovers,” Lindsey said. “Turnovers hurt us. Anytime you turn the ball over four or five times, it’s gonna be tough to beat a good team, so we gotta go to work on turning the ball over.”

The Rebels wasted no time getting on the scoreboard, starting with an 83-yard touchdown run on their first offensive down. The Jaguars blocked the extra point attempt, resulting in a 6-0 Vestavia lead to start the first quarter.

Contrarily, Spain Park’s first two drives didn’t get so far, and a Nick Mullens pass was picked off three plays into the third drive at the Jaguars’ 28-yard line, setting up a 3-yard Rebels touchdown run just three plays later, lifting Vestavia to a 13-0 lead with 2:14 remaining in the first quarter.

The Jaguars switched their strategy a bit in the fourth drive, relying heavily on the run, and it paid off.

“They had defended the run well, but as the game went we just felt like we were really struggling throwing the ball,” Lindsey said. “So we just tried to rely on the run more.”

In that drive alone, senior Sean Mardis had three carries for 28 yards, senior John Mwaituka had three carries for 17 yards and one reception for 8 yards, and senior Ashton Daniel carried the ball eight times for 40 yards, including a 1-yard touchdown run to cap the 80-yard drive, putting the Jaguars on the board with 9:20 left in first half.

“I just ran,” Daniel said. “We tried to follow our holes and read the blocks. I was trying to put my mindset on scoring touchdowns.”

On the next drive, senior Alex Roberson stopped a would-be Rebel touchdown play, forcing a fumble on the tackle at the Jaguar 1-yard line. Junior Jacob Wolkow recovered, returning the ball the the Spain Park 15-yard line, but the Jaguars were unable to capitalized on the ensuing drive.

Two quick turnovers to start the second half set the Jaguars back another seven points, as the Rebels ran in a 55-yard touchdown with 7:39 remaining in the third quarter, extending their lead to 20-7.

Still relying heavily on the run, Spain Park sealed another 80-yard scoring drive with a 9-yard touchdown run from Mardis with 2:17 remaining in the third quarter.

With momentum on their side, the Jaguars defense stepped up, forcing a three-and-out situation on Vestavia’s ensuing drive thanks to big stops from Roberson, Wolkow and junior Jeniah Jackson.

Mwaituka took the reigns on the next drive, helping the Jaguars into the Vestavia red zone, but the promising drive ended sourly for the Jaguars as Vestavia recovered a Mwaituka fumble on the Rebel 13-yard line.

The Jaguars got another chance at a comeback after the Rebels missed a 38-yard field goal with just over two minutes remaining in play, but a would-be Spain Park first down and the Jaguars’ hopes of victory were squashed when the Rebels forced another fumble, recovering the ball at their own 40-yard line to end the game.