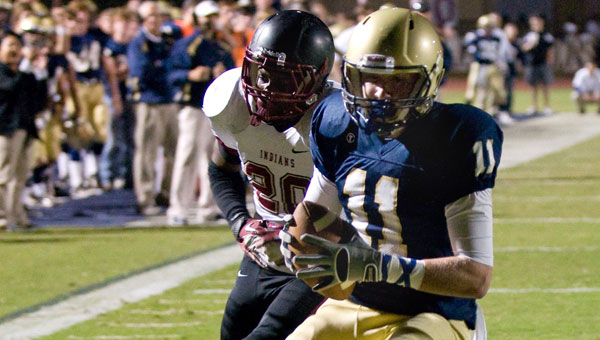 The Lions (7-1, 5-0) struck early after a 25-yard reception by senior Cole Pearson put Briarwood in position for a 2-yard touchdown pass from senior Ben Craft to junior Daniel Robert. A successful 2-point conversion run by senior Matthew Furuto gave the Lions an 8-0 lead with 7:11 remaining in the first quarter.

Sparks flew offensively for the Lions as they scored four more touchdowns in the second quarter alone.

“Our offensive and defensive lines really made the difference,” Yancey said. “They were just relentless.”

Craft completed a 31-yard touchdown pass to senior Michael Latham to start, etching in the 2-point conversion on a pass from Pearson to Craft. Roberts hauled in a 32-yard Craft pass for a touchdown, and a kick from senior Benson Mulvaney extended the Lions’ lead to 23-0 with 8:21 left to play in the first half.

Senior David Hodges carried the ball in from 1-yard out for the third touchdown of the quarter, and Furuto capped the half with a56-yard touchdown run with 1:26 remaining in the second quarter, giving Briarwood a dominating 37-0 lead after a successful Mulvaney extra point.

The Lions’ final score came on a 37-yard touchdown run from Furuto with 10:27 remaining in the third quarter, and with a 44-0 lead, Yancey said it was time to let some of him younger players get in on the action.

Pinson Valley sunk a 26-yard field goal early in the fourth quarter to get on the board, scoring again no a 17-yard touchdown pass with 1:23 remaining in play.

Furuto led the Lions in rushing, carrying the ball 11 times for 165 yards and two touchdowns. Senior Jon Stapleton had five carries for 29 yards.

“We knew this was a big region game,” Yancey said, “and this was the best we’ve played all year as far as a complete game.”