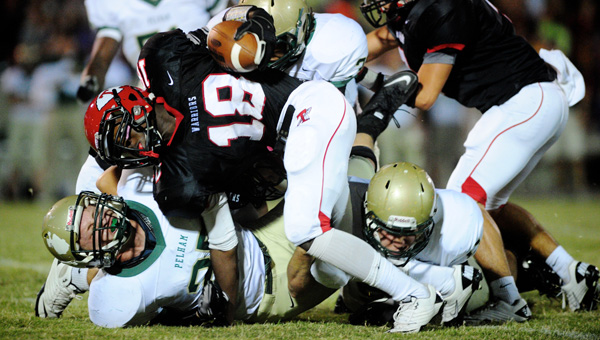 Thompson's Rasheem Mangault gets hauled down by a trio of Pelham defenders during the game Oct. 7. (Reporter Photo/Jon Goering)

“From what I’ve experienced in the past, you can just throw the win-loss records out coming into this game,” Burnett said after his Panthers defeated the Warriors 28-16 in the heated Battle for U.S. 31.

“Any time you can beat Thompson is good,” Burnett added. “The kids did a great job. This was a great team win.”

The Panthers racked up 279 yards of total offense on the night, 204 of which were rushing yards.

Although the Warriors were leading 10-7 at halftime, Thompson head coach Caleb Ross called the game a “tale of two halves.”

After a field goal attempt by THS punter Matt Nall went wide left in the first quarter, Pelham lit up the scoreboard first on a 46-yard touchdown run by Tyler Brasfield. John Perko’s PAT gave the Panthers a 7-0 lead early in the second quarter.

Thompson answered on its next drive when a 36-yard Nall field goal split the uprights to bring the game to 7-3.

After recovering a Pelham fumble at the Panthers’ 36-yard line, Thompson took the lead on a Dee Tolbert 12-yard rushing touchdown. Nall’s PAT gave the Warriors a 10-7 halftime lead.

After forcing the Warriors to punt to start the second half, Pelham retook the lead on a 4-yard rushing touchdown by Kenny Meadows. Perko’s PAT put Pelham on top 14-10.

On its next possession, Pelham extended its lead when Adams connected with Fletcher Johnson on a 28-yard touchdown pass. Perko’s extra point gave the Panthers a 21-10 lead.

After the Warriors turned the ball over on downs, Pelham started the fourth quarter with a 21-yard rushing touchdown by Meadows. Perko’s PAT extended Pelham’s lead to 28-10.

The Warriors cut the lead to 28-16 late in the fourth quarter when quarterback Trey Matherson connected with Hayden Franklin on a 10-yard touchdown pass.

After the Warriors’s two-point conversion attempt was stopped short, Thompson failed to recover an onside kick, allowing Pelham to knee the ball to seal the victory.

Brasfield led the Panthers’ ground attack, racking up 125 yards and a touchdown on three carries, followed by Meadows, who had 46 yards and two touchdowns on seven carries.

Pelham will return home Oct. 14 to face the Spain Park High School in a region game with playoff implications.