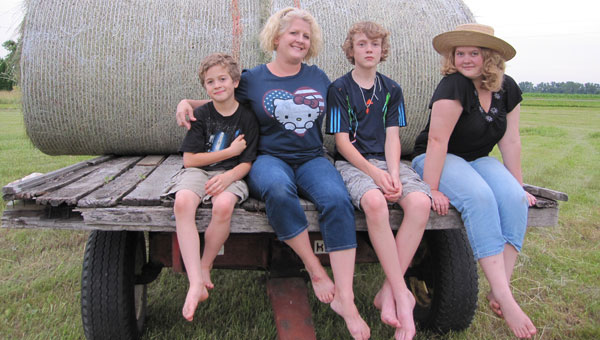 HELENA – After living in foreign countries such as Japan and Germany for the past five years, the Kendrick family has decided to settle in Helena.

Jamie Kendrick is an active duty Marine, and has been in the Marines for more than 18 years. Wendi, Jamie’s wife, is looking for local work as a medical transcriptionist and medical assistant.

“We’ve been a little bit of everywhere,” Wendi said. “We were in Japan for three years and Germany for two years. We bought our first house here in Helena, and here we are.”

Jamie was born in Ohio, and his family moved to Columbiana when he was 9 years old.

“He moved to Ohio his senior year of high school, but he claims Alabama,” she said.

“We had friends who helped us know where to move. We found a house and investigated schools. We thought Helena would be a really great place to be,” she said.

“Three different school buses pull up in front of the house in the morning,” Wendi said with a laugh.

“It was fun because we could travel. We were four hours from Paris, so that was pretty fascinating. (Germany) was really fast-paced and had the autobahn to drive on. It was a cool place to be with the kids.

“We really liked Japan while we were there,” she added. “Japanese people were so courteous.”

Wendi said her family has been fascinated with how important football is to Alabamians.

“Our first football game was kind of surreal,” she said.

Wendi said Helena reminds her of her hometown in Ohio.

“I love it (Helena). The town I grew up in had 60 people in my graduating class. After Germany — we lived in the fifth largest city in Germany — it’s a relief to come back to a small-town area,” she said. “That’s why we looked in this area. We wanted to be in a small town. It’s perfect, so close to everything, but still in the country.”