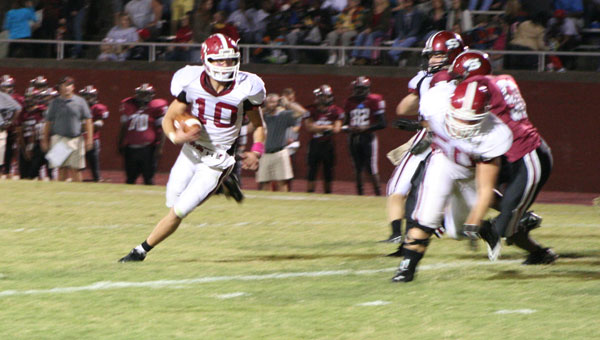 SYLACAUGA — The Shelby County Wildcats made their trek into Talladega County Oct. 7 to claim a 28-25 win over the Sylacauga Aggies.

In years past, the battle between the Wildcats and the Aggies has grown into a good, quality rivalry. Each team has dealt the other their share of blows. The Wildcats left their mark on Legion Stadium with a another good win over a athletic Aggie team Friday night.

“This is a good win for a coach tonight because all the chips were down for our kids to quit after the Southside Gadsden loss, but they didn’t and continued to keep working hard and didn’t give up,” Shelby County coach Ryan Herring said after the win.  “These back to back wins are just a testament to our kids and their ability to keep working hard.”

Just inside the start of the second quarter, Denzel Williams dove into the end zone capping off an 11-yard scamper.   After an Evan McNeal 2-point conversion around right end, the Cats claimed the slim lead 8-7.

Five plays into the ensuing Aggie drive, McNeal picked off a Aggie pass over the middle to put the Cats back in business at their own 34-yard line.   It was a 3rd and 13 conversion with Ty Proctor connecting with McNeal to set the visitors up inside the Aggie 10-yard line. The next play Proctor’s number was called on a quarterback keeper around left end.  After failed 2-point conversion, the Cats led 14-7.

A series of offensive exchanges between the two squads and a stalling drive before the half had the Wildcats heading into the half up by a slim seven points.

Into the second half, third down conversions proved to be pivotal for the Wildcats as Proctor connected again with McNeal on a 30-yard scoring strike after shaking to defenders inside the 10-yard line.  Another failed 2-point conversion extended the lead to 20-7 for the Cats.

Seasons come and go as does personnel, but one thing that has held true at Sylacauga is their fast paced, option read offense.  It’s an offense that has horsepower and it was showcased as the Aggies marched down the turf in three plays after a big kickoff return.  An Aggie 17-yard touchdown scamper trimmed the lead 20-13.

The Aggies were not going away and there was a heap of football to be played.  A fake punt on 4th and 5 proved to be the call and execution of the night for the Cats as McNeal found Montarious McGregor for a 64-yard touchdown strike.  Proctor finding Mike Pate in the end zone for the 2-point conversion cushioned the lead 28-14 for the Cats.

A crucial defensive series by the Cats on the next Aggie possession protected the lead as the Aggies booted a 26-yard field from the right hash.

Just inside the fourth quarter an 11-play scoring drive, starting from their own 21-yard line, let everyone on hand know the Aggies weren’t going away with a 6-yard scoring run from the quick Aggie quarterback from the Wildcat 18-yard line.  With six minutes remaining, the Wildcats had sunk their paws into a slim 28-25 lead.

After a four and out series by the Wildcats, the Aggies were surging and were in a position for a victory drive with three minutes left to play.  As McNeal’s instinct would have it, he broke in front on an Aggie receiver that would preserve the win for the Cats with an interception.

It was a night of conversions for the Wildcats on Friday night, converting on two third down and long snaps and two fourth downs.  Each preserved drives and the Wildcat lead.  The defense played improved, well enough to make stops when needed and forcing two turnovers.  The Aggies collected 322 yard of total offense.

The play of McNeal lead his team to a victory Friday night.  The senior has been the cornerstone of his team all year and, Friday night, it was his 215 all-purpose yards, receiving and rushing touchdown and two interceptions that help claim another win.  Williams had a solid night on the ground with 160 yards on 27 carries.  Proctor finished the night 6 of 8 and 110 yard through the air, throwing and running in for a score.

The 407 yard of total offense was a good night’s work.

The Wildcats welcome the Briarwood Christian Lions to Columbiana next week at Papa McCombs Stadium.

Eagles fall on road at Lincoln

FROM STAFF REPORTS The Calera High School football team fell on the road at Lincoln 35-9 in an Alabama High... read more