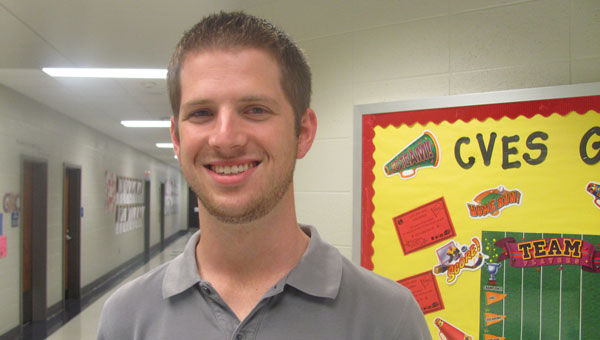 Creekview Elementary School third-grade teacher Chase Holden will be on national television soon, as he and his family competed on Family Feud. (Contributed)

In the coming months, you will see Creekview Elementary third-grade teacher Chase Holden and his wife and in-laws on national television. Holden can’t divulge the outcome but says it was fun and a great experience.

Holden looks like a teenager and loves sci-fi such as Back to the Future, Star Wars, or anything from Marvel comics. Family hobbies and interests include reading, (Harry Potter and Freakonomics), Auburn football, outdoor activities, church at Green Valley Baptist, hunting new restaurants on the weekend and spending lots of time with family and friends.

Holden met wife Laci at a Super Bowl party when they were in eighth grade. By the 11th grade, they were best friends and even attended the prom “as friends.” However, when the couple got into their first year at Auburn they began dating. Four years later, after graduation, they were married.

Both are elementary majors and proud of it. Daughter, Ava, will be 2 years old in February.

Last year, Ava struggled with asthma. A total of 21 days was spent at Children’s Hospital with two of her three visits requiring ambulance admittance. It was a very scary time for family and friends. Ava seems to be doing very well on her new treatment and Holden said the return of Ava’s good health is a true blessing.

Beginning his fifth year at Creekview, Holden can’t say enough about his school. He is a teacher-leader and admires the varied talents of the faculty.

“We strive harder than ever before by catering to all types of learning styles – visual, lecture, hands on, movement and audio,” Holden said.

Holden notes that it is much more difficult to get kids interested in target lessons due to their current environment. Over-stimulation is the norm for kids today – too much info to process and too many other activities demanding their time. Usually both parents have to work nowadays, and that too adds the need for careful planning and organization.

This past August Holden graduated from the University of Montevallo with his master of educational leadership degree. In his future as an educator, Holden plans to become an assistant principal, then a principal and perhaps later he said might be interested in political leadership in education.

A follower of Dave Ramsey, the Holdens are now credit card free but want to someday have only their mortgage.

“With no debt it would be easier to pay for things like college, vacations and other things that make life fun,” Holden said.

As a student, Holden attended seven different schools and was big brother to Drew and Derek. He said his favorite memories are of his grandfather’s backyard in Greenhill. The grandchildren enjoyed a mechanical bull made from an oil drum, football goals made from PVC pipes, zip lines and paint ball courses.

“I had a great home life and support system growing up that allowed me to follow my dreams,” Holden said. “I want to be that support system and afford other children the same opportunity.”

Sue Dennis has been serving as the Thompson High School registrar for more than 20 years. (Contributed) By SANDRA THAMES... read more