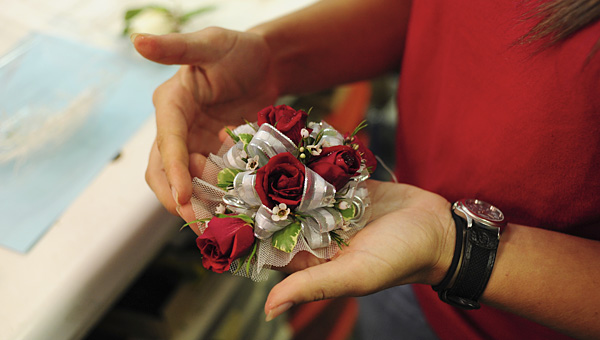 High school homecoming season includes football games, fancy dresses and, to go along with the dresses, a trip to the florist shop. Local florists stock their shops with an abundance of flowers to accommodate all of the high schoolers looking for homecoming dance adornments.

Desiree Shrestha of Pelham Flowers by Desiree said she keeps her whole staff “on deck” to be ready for any last-minute orders.

“You’ll always have those who forget and need it right then and there,” Shrestha said of orders coming in Saturday before the dance. “No one needs to feel like the Lone Ranger, someone always forgets.”

“They typically don’t know what exactly the name of the color of the dress is,” Shrestha said of high school boys. “We have to bring out our ribbons so they can pick. A lot of times, the girls will tell them what they want.” 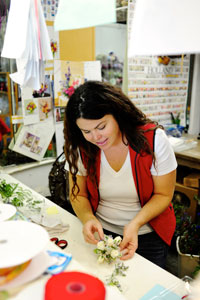 Desiree Shrestha, owner of Pelham Flowers by Desiree, works on a crosage in the store. (Reporter Photo/Jon Goering)

Linda Faust of Alabaster Florist said many high school boys won’t know what to ask for when they come into her shop.

“They say ‘I need that thing the girl wears on (her) arm,’ Faust said with a laugh. “The girls are just as bad sometimes. They’ll come in and ask for a corsage for the boy. They’ll want to add ribbons and try to turn it into a corsage.”

A few years ago, “the bigger the better” when it came to corsages and boutonnières, Faust said. Now, however, the trend is “tiny and petite.”

“Back in my day,” Shrestha said of the 1980s, “they used the big football mums, but now they’re using spray roses or orchids.”

“Now they don’t do that,” Faust said. “Now, it’s all about the dress and the dance afterwards. The flowers have to match the dress and not the school colors.”

“Also, hot cars are the main killer,” she said. “Flowers are pretty resilient, but they don’t need to be in the extremes.”

“The economy would be an elastic band, the middle-of-the-road corsage would have a beaded band and the deluxe would have rhinestone,” Faust said. “That’s the most popular with the girls. They like the sparkly.”