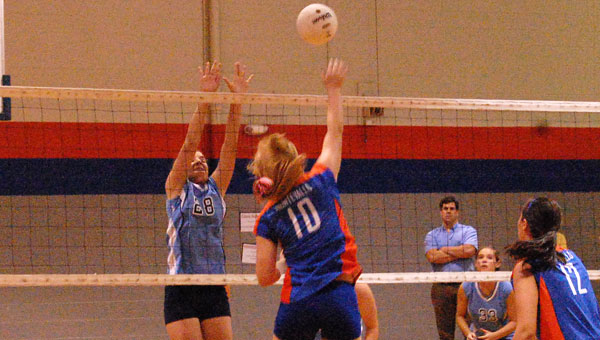 MONTEVALLO — The Montevallo High School volleyball team clinched its seventh-straight AHSAA Class 3A, Area 7 title Oct. 10 as the Bulldogs swept the Northside Rams 25-23, 25-10,25-20 in the finals.

“It’s a great way to end it,” senior Kathryn Ray said. “It’s really special for the seniors that we’ve won area in our gym for four years in a row through our whole high school career.”

The Bulldogs (21-1) trailed much of the first and third sets before rallying to a finish, a story-line Montevallo players, coaches and fans are far-too familiar with this season.

“That just seems to be a strategy of ours this year,” senior Mallory Anderson said. “It’s not on purpose, but it always seems to happen. We’ll start off slow, but we always end up doing what we have to do. It’s just a bad habit.”

It looked like a different team on the court during the second set as Montevallo surged to a dominating lead early on and didn’t falter. Again, it was Hyde who helped take the win for the Bulldogs with a block and kill on the final play of the set.

The third set found Montevallo down 5-14 early, mostly due to errors on its side of the court, but the Bulldogs surged to tie the game at 16-16 thanks to five kills and two tips from Anderson with four assists by Ray. The Rams kept up, as the two teams climbed to a 19-19 tie, but Anderson sealed the win for the Bulldogs with one kill, two tips and three services aces to close out the match.

Anderson, who won MVP of the tournament, led the team with 24 kills, 12 digs and three service aces. Ray added a team-high 25 assists, 16 digs and 12 kills on the night.

“We were just inconsistent tonight,” Montevallo head coach Tena Niven said. “It was almost like we were waiting on them to make errors — and they weren’t making errors — intstead of us attacking and making them make errors. We were able to pull it together and get the win, and that’s what’s important. It’s a championship, and we’re going to take it.”