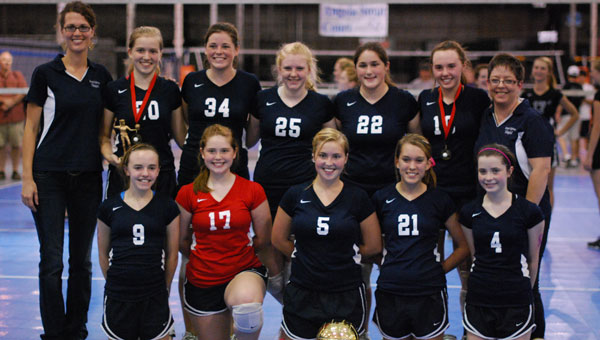 Evangel Christian School established its status as a powerhouse in Alabama Christian Sports Conference volleyball two years ago with the school’s first ever state championship.

The Lightning have done nothing to harm that reputation the past two years. Evangel Christian claimed its third consecutive ACSC championship Oct. 8 following a 25-16, 25-13 win over Evangel Family Christian Academy in the title match.

“I am really proud of how well they work together as a team and support each other,” said first-year Evangel Christian coach Caprice Lawrence. “They genuinely work as a team and everyone is ready to let another player on the court and take their time on the bench. ”

Ragland and McGriff, who was named the tournament’s most valuable player, were each named to the all-tournament team.

McGriff led the Lightning with 29 kills in the tournament. McGriff added 26 digs and 16 service aces.

Lawrence also singled out Caroline Joiner, Kate Ragland and Bethany Letson for their effort off the bench.

“They subbed in and out with excellent plays,” Lawrence said. “The team as a whole plays very well with the starting six and subs.”

FROM STAFF REPORTS The University of Montevallo volleyball team split a pair of Peach Belt Conference matches with UNC-Pembroke and... read more