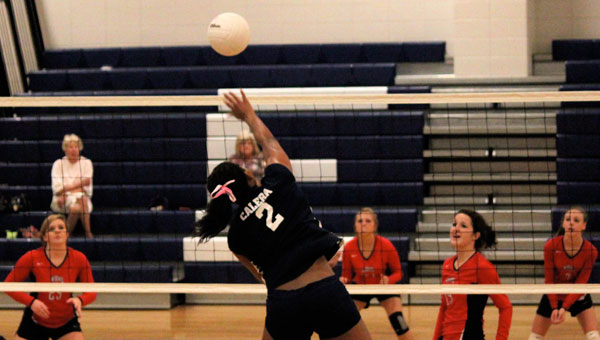 Calera High School sophomore A'Kia Harris finishes an attack during the Eagles' win over West Blocton in the semifinals of the AHSAA Class 4A, Area 6 tournament Oct. 11. (Reporter Photo/Kala Bolton)

The Eagles swept West Blocton 25-10, 25-12, 25-6 to advance to the finals. Calera took control early in each set, and killed the Tigers — literally. The team totaled 29 kills and 11 aces in the match. Harris led the group with 13 kills, eight digs and three aces and Caitlin Ryan added six kills and five digs. Amber Sherman had a team-high 12 digs, four aces and four kills.

“It’s exciting because we’ve never won area before, but it’s kinds downplayed because we wish we would have had a better competition out of Jemison,” Calera head coach Amanda Lewis said. “Jemison is a better team than they showed tonight, but I feel like we executed the balls that we needed to execute, and we played as well as we could. A win’s a win, and we’ll take it.”

The Eagles snatched a quick lead with two kills from Harris and services aces from Kellie Rasmussen and Elizabeth Rhinehart early in the first set. The Panthers had a late four-point run, but Calera quickly shut them down.

Calera dominated the whole second set and, thanks to tips from Rasmussen and Rhinehart paired with an Amber Jackson service ace late in the the game, held the Pathers to only six points. Keeping the same rhythm, the Eagles completed their shutout with a 25-11 win in the third set to clinch the area title.

“In practice we’ve been working on a lot of taking care of out-of-system balls and making them in-system as well as our side-out percentage,” Lewis said. “I feel like we did a better job of finishing games that we start and staying ahead in the match.”

Rhinehart had a team-high 15 digs and three service aces in the final match, while Harris led the team with eight kills. Sherman added 11 digs and four kills, Aubrie Smith had six digs and Caitlin Ryan totaled four blocks on the night.