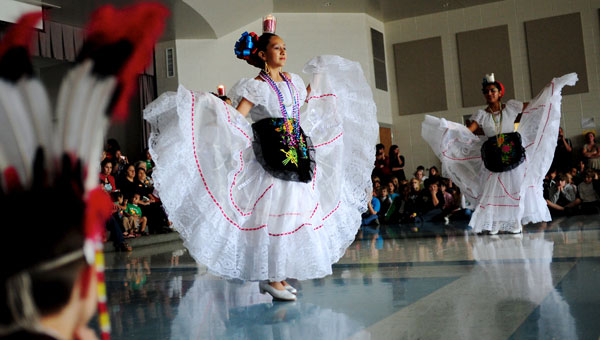 A line of nearly 300 children no more than two generations removed from a foreign country stretched around Valley Intermediate School Oct. 11 as they celebrated Pelham’s myriad collection of cultures.

During the Parade of Countries, which was part of the school’s International Bread Festival, children with ties to 52 different countries donned cultural garb and marched under the country’s banner as their classmates cheered them on.

The parade included children with ties to countries such as Pakistan, Nigeria, Saudi Arabia, Mexico and the United States. Many children in the parade wore the traditional garments of their respective countries.

The International Bread Festival day was the culmination of weeks of preparation by the school’s teachers and students, said VIS teacher Leslie Cranford, whose class focused on Nigeria.

“Our class has been learning the Nigerian stomp, and the kids will teach it to everyone who visits our classroom today,” said Cranford, whose class wore shirts dyed to look like the Nigerian flag.

After the parade, the school’s more than 700 students packed into the VIS auditorium to watch dance groups and classmates perform dances and musical pieces from many different countries.