Dentist helping military with a smile 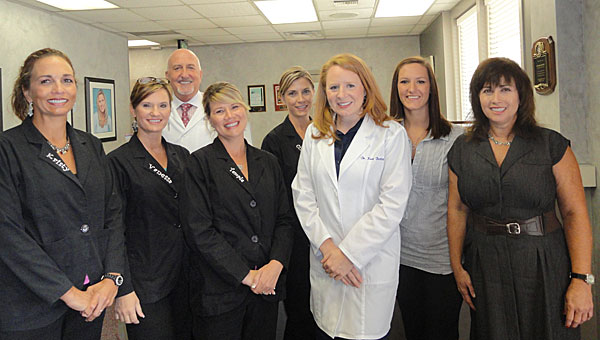 Alabaster dentist Dr. Thomas Dudney, third from left, and his staff recently teamed up with the Rick and Bubba radio show to host the Military Smile Makeover giveaway. (Contributed)

Alabaster dentist Dr. Thomas Dudney is looking to put a smile on the face of a local military active member or veteran, and is working with a well-known radio duo to help promote the contest.

Dudney, whose office is on Seventh Avenue Northeast, recently teamed up with the Rick and Bubba radio show to announce the first Military Smile Makeover contest.

Through the contest, the radio show hosts will collect nomination photos and essays between now and Nov. 11 before giving them to Dudney and his staff. All nominations must be written essays of no more than 500 words, and must be accompanied by a close-up photo of the nominee’s smile and a full-face photo of the nominee smiling.

Dudney said the Military Smile Makeover contest is a variation of a contest he and the radio show have held for Mother’s Day for the past few years.

“We have done a contest called Make Momma Happy for the past few years, and we started throwing around the idea of doing something similar for our military personnel,” Dudney said. “This is the least we can do to let the members of our military know that we appreciate their service.”

After Dudney reviews the nominations, he will select the top three stories and photos before giving them back to Rick and Bubba. The radio hosts will then read the top three nomination stories on-air Nov. 12 before allowing listeners to determine who wins the top prize on Nov. 18.

The grand prize will be 10 upper veneers and bleaching trays for the winner’s lower teeth.

“We approached Rick and Bubba and asked them if they would be interested in helping us do this, and they said they would be happy to,” Dudney said Oct. 12. “We actually announced the contest on the show this morning.”

Dudney said the Mother’s Day contests in the past have brought between 100-150 nominations, but he said the number could be higher for the military contest.

“I read every one of the essays. Some of them really tug at your heartstrings,” Dudney said. “It’s hard to pick just one winner.”