Teams kicking off Relay for Life 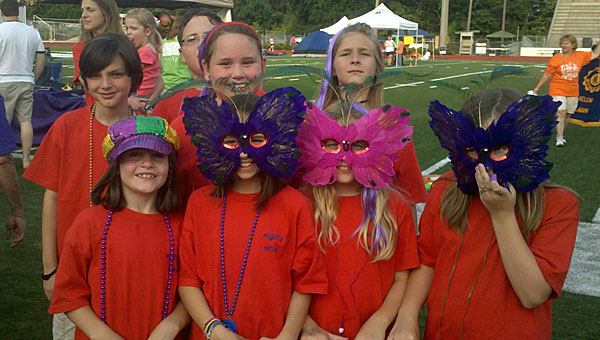 Members of the Mighty Mites Relay for Life team prepare to take the track during the 2011 Relay at the Pelham High School track. (Contributed)

When Helena Intermediate School fifth-grader Elizabeth Turner learned about a few of her classmates battling cancer, she knew she had to do something help make a difference in their lives.

After speaking with her mother, Amy, Elizabeth Turner decided to organize a team to compete in the 2011 Relay for Life event held at Pelham High School. After countless hours of collecting donations and holding fundraisers, Turner and her seven other teammates were able to donate more than $3,500 to the American Cancer Society.

“She wanted to organize a team last year because of the kids at her school that were battling cancer,” Amy Turner said, noting her daughter’s Relay team is named the Mighty Mites. “Riley Montgomery is in her class, another student with cancer was in her class and one of the student’s moms was battling cancer.

“I think seeing the kids her age affected by cancer really made her sympathize with it,” Amy Turner added.

When the time came for teams to register for the upcoming 2012 Relay for Life of North Shelby, Amy Turner said her daughter had no reservations about signing up again.

“She said she wants to do it every year now,” Amy Turner said with a laugh. “I think it’s really great that she wants to do that. That’s the kind of thing you always hope your children will do.

“She wants to be the one getting out there and making things happen,” Amy Turner added.

Through Relay for Life, which will be held at the PHS track on May 18, 2012, participants and teams collect donations for the American Cancer Society before completing laps during the event to honor those who are battling or who have battled cancer.

Event organizers will be holding a Relay kickoff event on Oct. 18 at Nino’s Italian restaurant to allow teams to sign up for next year’s event. The restaurant will donate 10 percent of its sales during the event to the American Cancer Society.

Pelham resident Maurice Mercer, who helped to organize the kickoff, said he also became involved in Relay after someone close to him was affected by cancer.

“I graduated in 2004, and one of my classmates died in 2009 from cancer,” Mercer said. “That really hit close to home to know that someone I was close to isn’t here anymore.”

Over the past few years, Mercer and his fraternity, Kappa Alpha Psi, have fielded Relay teams and donated several thousand dollars to the American Cancer Society.

“We just wanted to give back and help any way we could,” he said.