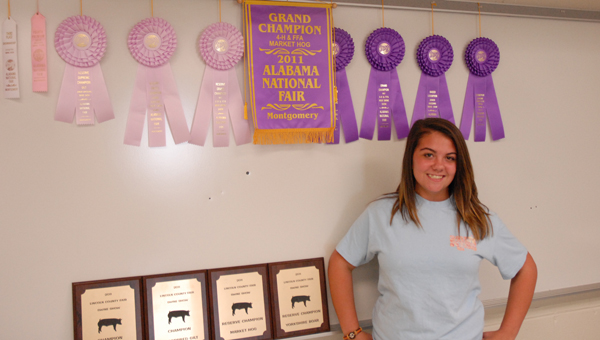 Cheyene Wells, a freshman at Shelby County High School, poses for a photo with some of the awards she won at the recent Alabama National Fair. (Reporter photo/Brad Gaskins)

COLUMBIANA – When Cheyenne Wells was in the seventh grade, her dad bought her a $100 pig and introduced her to breeding and showing livestock.

She won the top prize – and a slew of other awards – last weekend at the 58th annual Alabama National Fair and Agricultural Exposition in Montgomery.

She won the title of 2011 Champion Supreme Competitor after scoring higher than 166 other young competitors showing 289 pigs. All told, Wells won 13 ribbons: six for first place, four for second place, two for third place and one for fourth place.

“I was shocked,” said Wells, an aspiring veterinarian who also serves as president of her school’s FFA chapter.

Wells breeds and shows both cattle and swine and travels to about 20 competitions a year. Last summer, for example, she went to competitions in Iowa and Kentucky. She’s currently preparing swine for the Dothan Peanut Festival, followed by competitions in Jackson, Miss., and Perry, Ga.

It’s a lot of work but well worth it, Wells said.

She works with cattle and swine for at least two hours a day, seven days a week on property owned by Donald “Peewee” Gregory. While Gregory advises her on swine, Barkley Thomas helps with cows.

She credits both men for much of her success, though she does most of the work herself – from mixing feed to artificial insemination. She also helps with the care of 30 cows, 20 sows and about 80 pigs, rarely leaving the barn before dark.

Wells said she enjoys the work because she loves animals and has wanted to be a veterinarian for as long as she can remember. Showing and breeding livestock has opened some doors for that to happen.

Wells keeps in contact with animal science professionals at Auburn and is scheduled for a “scrub-in” tour of the university’s swine unit.

Nick Wells was involved in livestock breeding and showing when he was a student at Shelby County. He graduated in 1997 and now works in the school’s maintenance department.

“It’s a great opportunity for her to be able to do something she wants to do and have success at it,” he said.

Wells still has the $100 pig from three years ago. It’s produced four litters and given Wells a jump on what she hopes is a future as a vet.

Teams kicking off Relay for Life

Members of the Mighty Mites Relay for Life team prepare to take the track during the 2011 Relay at the... read more