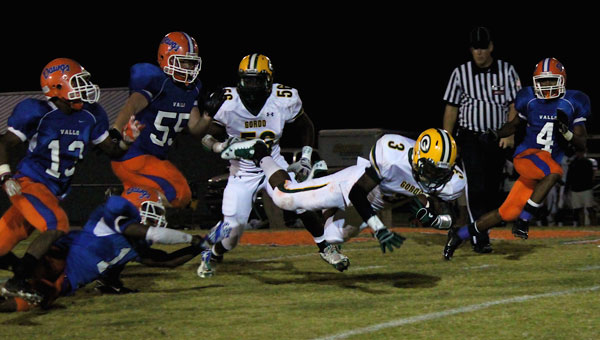 MONTEVALLO — A disappointing second half led to a Montevallo rout by the Gordo High School football team as the Bulldogs suffered a 64-7 loss on senior night at Theron-Fisher Stadium Oct. 14.

Montevallo turnovers proved the deciding factors in the loss, but Bulldogs’ head coach Jamie Williams was proud to say his players never gave up.

“We told them the story before the game about Shadrach, Meshach and Abednego in the Bible,” Williams said, “and they said that God will deliver us, but if he chooses not to, we’re still gonna have faith in him. That’s what I basically told them at halftime. I said that no matter what happens, we’re still going to believe in what we do and have faith in that, just like the story out of the Bible. I’ve never questioned these kids’ heart and determination, and they’ll never give up. That’s why I like to coach these kids”

The Bulldogs looked strong in the first half and got gutsy on their first call with an onside kick to start the game. Montevallo recovered the ball at the Gordo 40-yard line, but a turnover on the next play stopped the Bulldogs before they got started.

The defense stepped up, stopping the Greenwave to set up an 87-yard, seven-play Montevallo drive that culminated with a 12-yard touchdown run by senior Garrius Chappell. A Brett Gray extra point gave the Bulldogs a 7-0 lead with 5:38 remaining in the first quarter.

On the ensuing drive, junior Korey Cunningham batted down a Gordo pass on fourth-and-long to give Montevallo the ball at its own 37-yard line, but a missed Bulldog field goal set up an 80-yard scoring drive by the Greenwave.

R.J. Scaife returned the ensuing kickoff to the Gordo 41-yard line, but the Greenwave blocked a Montevallo field goal attempt, setting up another Gordo scoring drive. A missed PAT gave the Green Wave a 13-7 lead to end the half.

“To come out and go 7-0 and hold them to basically nothing in the first quarter I think was a test of our kids, and they believe in what we’re doing,” Williams said. “For a quarter, we played some good football, we’ve just got to put together a full game.”

The Bulldogs received the ball to start the second half, but fumbled on the first snap. The turnover set up a 47-yard touchdown pass on the next play to extend Gordo’s lead 21-7.

“I feel like we should have come out how we played in the first half,” Chappell said, “but the turnovers killed us in the second.”

And that’s how the third quarter went. Montevallo turned the ball over on five of its six drives in the third quarter, each leading to a Gordo touchdown. The one drive the Bulldogs didn’t turn the ball over, the gave up a safety after a bad snap on a would-be punt rolled out of the Montevallo endzone. The Bulldogs found themselves in a 58-7 deficit to start the fourth quarter.

“You cant turn the ball over and win,” Williams said, “and thats the number one thing we preach.”

On the first drive of the fourth quarter, the Bulldog defense forced a Gordo three-and-out drive after senior Patrick Lawley made a huge stop on third down. Montevallo punted the ball after the offense failed to capitalize, and Gordo scored its final touchdown of the night on a 6-yard touchdown run nine plays later, bringing the score to 64-7 with 2:23 remaining in play.