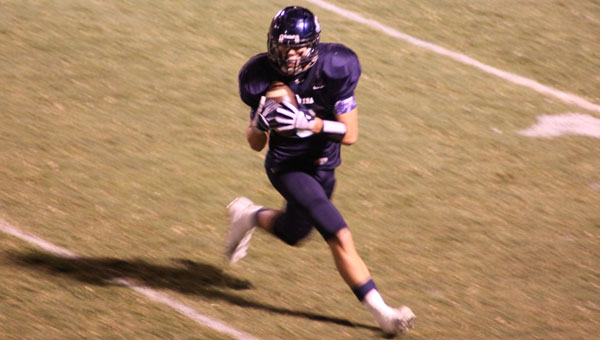 CALERA — Calera High School celebrated homecoming Oct. 14 against visiting Munford, but unfortunately the visiting Lions dampened the festivities as they defeated the Eagles 19-16.

The loss drops the Eagles to 2-6 overall and 1-5 in Alabama High School Athletic Association Class 4A, Region 3 play.

The Eagles would got an early boost after holding the visitors on their first possession when T.J. Killingsworth forced a bad punt to give Calera possession on the Munford 25-yard line.

Sam Adams carried the ball down to the 15-yard line, but an intentional grounding penalty  eventually took the Eagles out of scoring position.

Munford took advantage and drove 86 yards for a score on a 1-yard run to take an early 6-0 lead.

Calera’s next two possessions resulted in 42 yards, but the Eagles failed to get any points on the board.

After Jeremy Hyde returned the kickoff to the 44-yard line, Calera drove 40 yards on seven plays.  Fransisco Del Rio kicked a 33-yard field goal with three seconds left in the second quarter to cut the deficit to 12-3 at halftime.

Calera continued moving the ball in the second half as they took the kickoff and marched 71 yards on nine plays for a score.  The big play was a 37-yard pass from Zack Reneau to Jordan Bishop before Sam Adams scored on a 1-yard touchdown run.  Del Rio’s extra point helped Calera close the gap to 12-10 with eight minutes remaining in the third quarter.

Calera had a golden opportunity to take the lead when Killingsworth blocked a Munford punt, which gave the Eagles the ball on the 11-yard line, but back-to-back penalties and an interception kept Calera out of the end zone.

Munford increased its lead to 19-10 when the Lions scored on a 63-yard run with 10:33 remaining in the fourth quarter.

Calera answered right back on an eight-play, 68-yard drive. Reneau completed all six of his passes on the drive, with the last being a 30-yard touchdown reception by Jordan Bishop.  The extra point failed as Calera cut the lead to 19-16.

Calera had one last chance to score, but fell a yard short on a fourth-down play and Munford ran out the clock to end the game.

Adams led the rushing attack for the Eagles as he gained 95 yards with a touchdown on 22 carries. Reneau passed for 215 yards with one touchdown and Jordan Bishop hauled in five passes for 99 yards and a touchdown.

Sheldon Nixon and Jeremy Hyde led the Calera defense with eight tackles each.