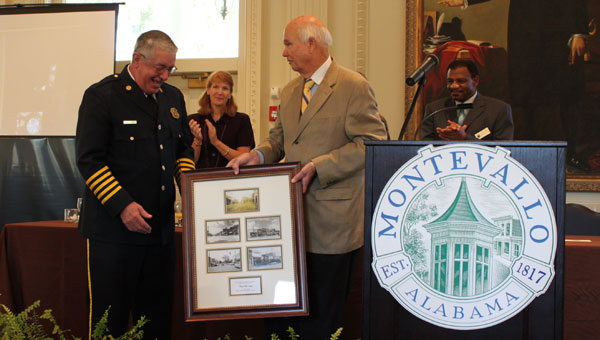 MONTEVALLO – American Village’s Tom Walker said he sees a “stirring of a lot of good” in the Montevallo community, and much of the good came about in Montevallo’s Hometown Heroes.

The community came together on the morning of Oct. 14 to honor hometown heroes at the Second Annual Mayor’s Breakfast at the American Village.

Atkins, McCrory said, graduated from Montevallo High School in 1939 and served in the U.S. Army for 35 years in World War II, the Korean War and the Vietnam War.

J.A. Brown has called Montevallo his home for 91 years, he said. He attended Montevallo Elementary, Middle and High School, graduating in 1938. Brown served on the city council for more than 28 years; he also served on the University of Montevallo Foundation Board and the board of directors for Merchants and Planters Bank.

DeVinner enlisted in the National Guard at 16 years old. He attended the State Trooper Academy in Selma after attending the University of Montevallo for three years. In 1997, he graduated from the Alabama Military Academy with honors. In 1999, the Alabama State Trooper Association selected DeVinner as Trooper of the Year.

Reid has served Montevallo as fire chief since 1997 and has received 160 firefighter certifications. He promoted the addition of a second fire station in the city, which opened in 2004.

As last year’s hometown hero, Robert Lightfoot, was unable to attend the breakfast due to snow, McCrory invited Lightfoot to participate as this year’s keynote speaker.

To conclude his speech, Lightfoot, the director of NASA’s Marshall Space Flight Center in Huntsville, showed a picture of the earth from the space station.

“One of those little dots on that earth is where I grew up,” Lightfoot, a Montevallo native, said, “and I couldn’t be more proud. Those of you who are Hometown Heroes, be proud of where you came from and congratulations.”