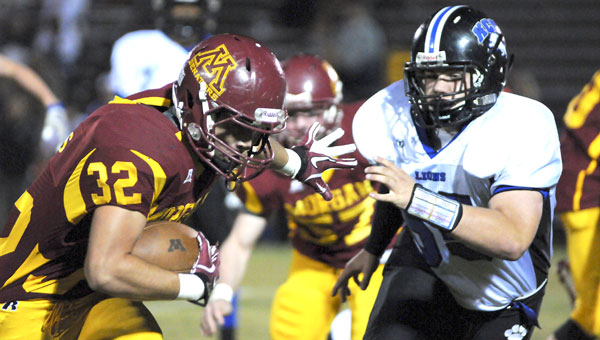 By RICK COUCH / For the Reporter

The Senators rolled up 429 yard of rushing, led by Parker Hughes with 231-yards on 14 carries, to keep the Lions’ pass-happy offense off the field and pile up points.

Coming into the game, head coach Brian King said he stressed the importance of a victory and what it could mean down the road.

“We knew it was a must-win game for us,” he said. “It’s huge to get a region win because we clinch third place with this.”

It didn’t take Morgan long to get going offensively. Hughes broke free for a 62-yard run on the fourth play of the game to put the Senators up 6-0 with only 1:16 off the clock. McCain Levis added the extra point to make the score 7-0.

Levis again got in on the action on the Senators next drive breaking free for a 5-yard touchdown run to make the score 14-0 following his extra point with 5:34 remaining in the first quarter.

The Senator offense slowed things down on their first drive of the second quarter and appeared to be stumped at the Lion 13 yard line. However, on a fourth down play, quarterback Dalton Lee found Trevor Bates for the score.

Lee said he felt like the play would connect if he was patient in the pocket, and he was right.

After a Kingwood three-and-out, the Senators again struck quickly. Hughes again found the end zone on the third play of the drive from 9 yards out to give the Senators even more breathing room at 28-0.

But Kingwood still had some gas left in the tank. Gavin Sumrall connected on several passes to move the Lions into  Morgan territory, The drive ended with Luke Edge connecting on a 22-yard field goal to make the score 28-3 at the half.

Morgan’s rushing attack was just as hot in the second half. On the Senators’ first possession of the third quarter Levins, who finished the night with 72 yards on 10 carrier, gained 46 of them on a single sprint to set up a 24-yard touchdown run by Hughes.

The extra point made the score 35-3, and it appeared the Senators would pull away.

However, Sumrall got in a rhythm and hit Montez Haynes on a 37-yard slant route to make the score 35-10 with 6:07 to go in the third after an Edge extra point.

Just when the Lions thought they were gaining momentum, Hughes broke free for 63 yards and another score on Morgan’s next drive to make the score 42-10 after the extra point with 5:14 to go in the third.

The Lions added one more score when Haynes broke free for a 79-yard run on a botched punt to make the score 42-17, but it would be their last points of the game.