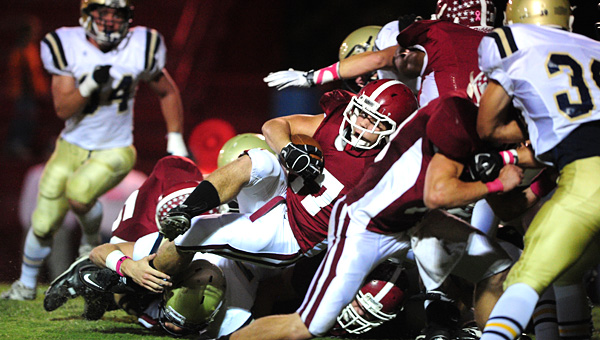 SCHS fullback Brent Wooley gets taken down during a carry in Friday night's game against Briarwood. (Reporter Photo/Jon Goering)

It’s been a common scene for years following Briarwood Christian games, with Forester sharing what went right and what went wrong defensively for the Lions.

Friday night, with Forester in his first season as a defensive assistant coach at Shelby County, the Lions’ victory over the Wildcats marked the first time many of his former players had seen their beloved coach this season.

“It’s been the weirdest week of my life,” Forester said after the game.

It was also a weird week for Forester’s son, Matthew, who took his father’s place as the Lions’ defensive coordinator and coached against him for the first time after working together the past few years on the Briarwood Christian staff.

“I learned everything from him,” said the younger Forester. “There probably wasn’t anything we did that (did) surprise him.”

The Lions didn’t waste any time taking an early 7-0 lead. Briarwood Christian senior Kalan Reed returned the opening kickoff 82 yards for a touchdown and Benson Mulvaney added the extra point with 11:44 left in the first quarter.

Shelby County (3-5 overall, 3-3 in Class 5A, Region 5) responded quickly with a 6-yard touchdown run by Denzel Williams on its opening offensive possession. Brent Wooley’s run on the 2-point conversion attempt came up short, which left the Wildcats trailing 7-6 with 6:23 remaining in the opening quarter.

Briarwood Christian went ahead 37-6 following a 24-yard touchdown pass from Craft to William Rutledge with 1:24 left in the first half. The Lions pushed their lead to 44-6 with a 20-yard touchdown run by Sam Whitaker and an extra point by Mulvaney with 9:15 remaining in the third quarter.

Shelby County cut into the lead with a 1-yard touchdown run by Wooley and a successful rush for the 2-point conversion by Ty Proctor, which cut the deficit to 44-14, with 6:52 remaining in the third quarter. Williams darted into the end zone from 77 yards out with 2:52 left in the third quarter and Williams ran in for the 2-point conversion to cut the Lions’ lead to 44-22.

Michael Latham capped the scoring for the Lions with his 7-yard touchdown reception from Craft with 10:50 remaining in the game. Mulvaney’s extra point gave the Lions a 51-22 advantage.

Shelby County capped the scoring in the game with 12 seconds remaining when Evan McNeal reeled in a 33-yard touchdown reception from Proctor and Marterius McGregor rushed in for the 2-point conversion.

Craft said he’s noticed a change in his teammates since a loss to Vestavia Hills in week five of the season. The Lions have won three straight region games since their only loss of the season.

“The loss hurt,” Craft said. “The only thing that I’ve noticed is our intensity level has gone up.”

The game between the Lions and the Wildcats featured a “Pink Out” theme, with band members of both schools wearing pink T-shirts with the slogan, “Losing is not an option.” Both schools sold the T-shirts with proceeds supporting the Breast Cancer Research Foundation at UAB.