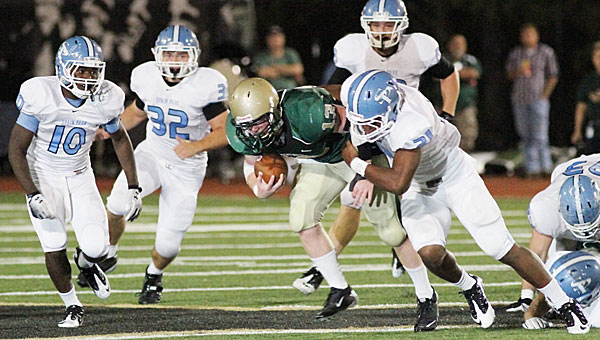 The Spain Park Jaguars inched one step closer to securing a playoff spot while shooting down Pelham’s first chance this year to punch a ticket to post-season play Oct. 14.

The Jaguars downed the Panthers 34-9 during Pelham’s homecoming game, putting Spain Park in control of its own playoff destiny.

“We knew we had to win this week to have a chance to get into the playoffs,” said Spain Park head coach Chip Lindsey. “Pelham had a good plan for us, but we fought through for a big victory.”

Pelham head coach Brett Burnett said his team still has an outside chance to make it to the playoffs.

“We had poor execution tonight. Our defense was out there too often,” Burnett said. “But we’ve just got to get back out next week and keep fighting, because we’ve still got a chance to make it to the playoffs.”

Pelham racked up 358 total yards on the night, 300 of which were rushing. Eli Beall led the Panthers’ ground attack, rushing 97 yards on 19 carries.

The Jaguars lit up the scoreboard first late in the first quarter, when quarterback Nick Mullens connected with M.J. Brown on an 18-yard touchdown pass. Jake Hoffman’s PAT gave Spain Park a 7-0 lead.

The Jaguars capped off a 59-yard scoring drive late in the second quarter when Ashton Daniel reeled in a 13-yard touchdown pass from Mullens. Hoffman’s extra point extended the Jags’ lead to 14-0.

Pelham answered on its next drive when John Perko connected on a 38-yard field goal.

On its first drive of the second half, Spain Park extended its lead when Reid Reiangel caught a 31-yard touchdown pass from Mullens. Hoffman’s PAT gave the Jags a 21-3 lead.

The Jaguars added to their lead late in the fourth quarter when John Mwaituka ran the ball into the end zone from 36 yards out. A blocked PAT gave the visiting team a 27-3 lead.

Pelham answered a few plays later when Devon Mines ran 89 yards for a touchdown. A failed two-point conversion brought the game to 27-9.