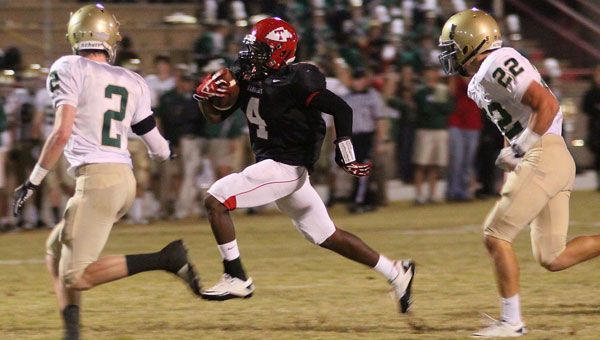 ALABASTER — Mountain Brook High School took charge early and never let up as the undefeated Spartans rolled to a 40-13 victory over Thompson on the Warriors’ senior night Oct. 14.

As has been the case this season, Thompson failed to capitalize on the opportunities given to the Warriors in the first half.  A dropped pass in the end zone and a fumble on the Mountain Brook 5-yard line was the difference in the score being 17-14 versus 17-0.

After the fumble, the Spartans used a combined run and pass attack to drive 95 yards for another score. The drive culminated with a 7-yard touchdown run by Mark Rector.  Mountain Brook scored again before the half and take a 30-0 lead into the locker room.

“Mountain Brook is a great team and we knew we faced a big challenge tonight,” said Thompson coach Caleb Ross.  “The one thing that I am most proud of is the fact that these guys continue to play hard and they haven’t given up on this season.”

That toughness was evident as the Warriors took the field in the second half. The hits kept coming on defense, and the offense finally found its rhythm moving the ball.

During their only possession in the third quarter, the Warriors took the ball 80 yards for their first score of the night. Dee Tolbert took the handoff from Trey Matherson and rumbled 28 yards for a touchdown, which temporarily cut the deficit to 37-6.

Matherson would also get the passing game going in the second half as he again piloted his team down the field. He connected with Avery Hale for a 23-yard touchdown and Matt Nall added the extra point to cap the scoring for the Warriors.

Matherson finished the night 13-of-17 passing for 174 yards and a touchdown. He also scrambled for 30 yards on the ground. Hale was the leading receiver with six catches for 134 yards including a long of 59.

Thompson will hit the road next week as they travel to Spain Park to face the Jaguars.

Oak Mountain High School junior Hannah Kowal prepares to serve the ball in the Eagles' win over Thompson in the... read more