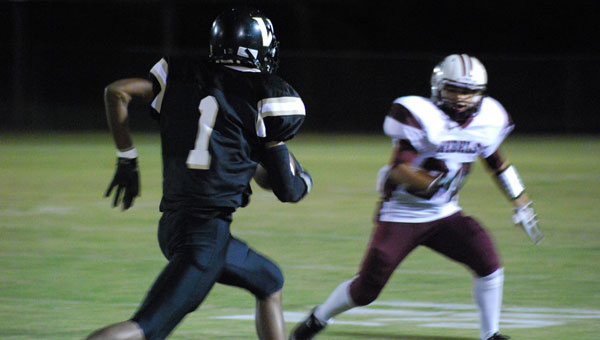 VINCENT — The Vincent Yellow Jackets forced seven turnovers as they went on to beat the Thorsby Rebels 40-0 in an Alabama High School Athletic Association Class 2A, Region 4 game Oct. 14.

Both teams got off to a slow start. After punting on their first two drives, the Yellow Jackets finally found the end zone late in the first quarter as ShaCorry Lilly ran it in from 8 yards out to give Vincent the lead.

On the first play of Thorsby’s opening drive, Tanner Sands intercepted a pass to take the ball back for the Yellow Jackets. On the very next play, Lilly took the ball in from 24 yards out to give Vincent a 14-0 lead over Thorsby.

On the next kickoff, Terio Rogers stripped the ball from the hands of the return man and returned it 26 yards for another Yellow Jacket touchdown. The Vincent defense forced  punts on every drive following the turnover in the second quarter and scored on the final two drives of the first half.

A 76-yard pass from Damauntey Johnson to Rogers and a 64-yard run from Lilly gave the Yellow Jackets a 33-0 lead going into the locker room.

Thorsby got the ball to start the second half. After driving the ball across midfield the Vincent defense forced yet another turnover, this time an interception by Rogers. The turnover led to a clock grinding 12-play drive that led to a touchdown run by Micheal Gilham to give Vincent a 40-0 lead.

As Vincent was trying to eat most of the clock in the final quarter, Thorsby was still trying to get on the board. But the Yellow Jacket defense would not let up.

Vincent forced two more turnovers in the fourth quarter, both in the red zone and stopping potential scoring drives.

“We had some issues last week giving up some points, but we fixed most of those mistakes tonight on defense” said Vincent coach Zeb Ellison.

Vincent improved to 7-1 overall and 6-0 in region play with the victory. The Yellow Jackets travel to American Christian Academy in Tuscaloosa next Friday night.