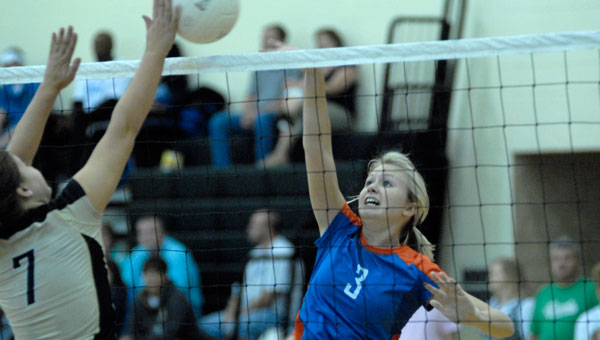 The Bulldogs, who swept Northside in the AHSAA Class 3A, Area 7 tournament championship match Oct. 10, earned a 25-17, 25-14, 25-21 sweep against the Rams in the region tournament title match.

Senior Mallory Anderson led the Bulldogs (24-1) with 24 kills in the victory. Anderson also recorded a team-high 14 digs to finish with a double-double.

Anderson was named the tournament’s most valuable player after racking up a tournament-high 58 kills in the three matches.

Fellow senior Kathryn Ray, who recorded 11 digs and 18 assists in the championship match, and junior Sarah Hyde, who chipped in three kills and six digs in the title match, were named to the all-tournament team.

Anderson registered 18 kills, including 11 kills in the second game, to go along with 15 digs and two service aces.

Montevallo, which lost only one match during the regular season Sept. 17 against Central-Tuscaloosa in the Jemison Invitational, will host Abbeville in a sub-state match Oct. 20.

Indian Springs School, which earned a spot in the region tournament after finishing runner-up in the AHSAA Class 3A, Area 8 tournament Oct. 10, ended its season with a loss to Marbury in the quarterfinals.