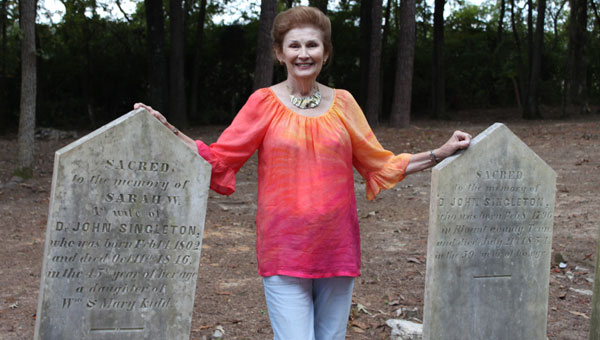 Anne Gibbons stands with Dr. John Singleton's grave in the Old Bailey Cemetery in Arkwright. Singleton and his three wives were buried in the cemetery. (Reporter photo/Christine Boatwright)

VINCENT – The Shelby County 62 loop in Vincent contains the historical district of Arkwright, a community forgotten by progress.

In early October 2011, the Alabama Historical Commission named the 104-year-old, 13-site Arkwright Heritage Area to the Alabama Register of Landmarks and Heritage, thereby reserving its place in history.

Anne Gibbons and her husband own riverfront property along the Coosa River in Arkwright. Gibbons’ parents purchased the property in the 1940s. Although she lives in Birmingham, Gibbons spent many weekends and summers learning to swim in the Coosa River and spending time in Arkwright. She prepared the application for the Arkwright Heritage Area to present to the Alabama Historical Commission in August.

“Arkwright is very unique,” Gibbons said. She said Arkwright has “natural and manmade” barriers to protect the area, including the Coosa River, Spring Creek and the railroad tracks. “It has remained unchanged to progress, and man has not come beyond this.”

According to Gibbons, founders of the area filed a plat for the town in 1907. The area was named after Preston Arkwright, an official of the Atlanta, Birmingham & Atlantic Railroad. He was also founder and president of Georgia Railway and Electric Company, according to an Alabama Historical Commission press release.

“Trains weren’t stopping here anymore. Soon after that, they closed the post office and railroad station. It took less than a year,” Gibbons said. “I don’t know if that was the cause (of the town’s downfall), but I’m sure that had a lot to do with it. It makes a difference to a little town.”

The Bailey Cemetery, which the Vincent Historical and Environmental Society and the community have been restoring, houses graves of American Indians, plantation owners, pioneers and slaves.

Gibbons said the cemetery could contain about 1,000 graves, both marked and unmarked. Eighty students visited the cemetery through the Alabama Governor’s School during the summer to begin cleanup on the cemetery. Gibbons called this cleanup day “our happening,” as it was when the preservation project began to happen.

“It’s a jewel,” Gibbons said of Arkwright. “The people have come and they’ve stayed, both white and black. Families that came for the railroad stayed. That’s the feeling of the area — it’s family to all of these people.