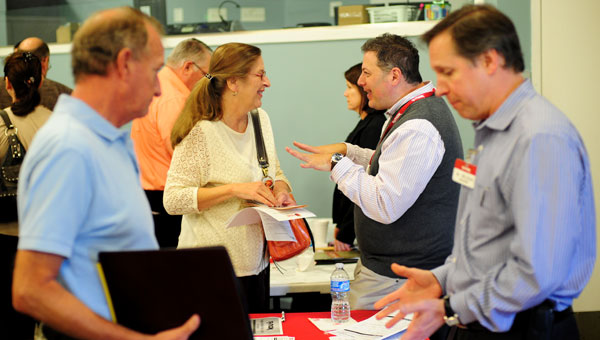 Calera Walmart employee Judy Jones, like representatives from dozens of other firms, spent several hours at her company’s booth Oct. 18 while helping to recruit the next generation of older employees.

But unlike many of the other representatives at the fair, Jones had firsthand knowledge of the issues the job seekers were facing.

“I was in the telecommunications business for many years. When I retired, I was looking for something to bridge the gap,” Jones said. “Last year, I came to this fair and talked with the representatives at the Walmart booth.

“They encouraged me to submit my application online, and I did that last October. I was hired on Nov. 2,” Jones said. “So I know this job fair works.”

Jones and dozens of representatives joined hundreds of people age 50 and older at the First Baptist Pelham annex building throughout the day as they recruited experienced workers and retirees to sign on with their workforces.

Marvin Copes, a job counselor with the Positive Maturity organization, has helped to organize the event for the past several years, and said companies enjoy hiring older workers because of their attitude and work ethic.

Although the event drew more than 600 attendees last year, Copes said the state of the economy drove this year’s crowd up significantly.

“So many mature workers are out of work right now because they were laid off, downsized, took early retirements or whatever,” Copes said. “Companies love hiring older workers because they always show up on time, they are reliable, they don’t text all the time, they don’t complain and the majority of them aren’t just in it for a paycheck.”

Farmers Insurance District Recruiting Manager Gregg Danielson, who manned a booth at the job fair, said he and his company were looking to tap into the senior citizen workforce.

“A lot of seniors feel they have been given up on, but we don’t feel that way,” Danielson said. “The experienced workforce is a great market. If we only find one or two agents here today, that will be a success for us.”

“We will teach them how to use computers, draft resumes and things like that,” Clarke said. “When someone has been working for a company for 30 years and they get laid off, It’s like they are Rip Van Winkle where they wake up in another century.”