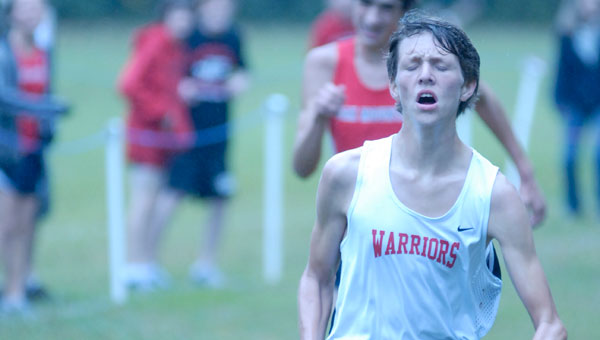 Nearly every Friday morning in the fall, Thompson High School sophomore Michael Johnson rises before the sun to put in a day of work typically reserved for those training for the Olympic games.

Before the first beams of sunlight hit the city, Johnson hits the hilly streets of the Weatherly neighborhood to get in a running workout before heading to THS to begin his school day.

“I usually do the workouts (THS track) coach (Paul) Anderton assigns us, but I have to run early on Friday because I’m in the band and I go to the football games on Friday nights,” Johnson said.

After pulling a 5 a.m.-10 p.m. Friday, Johnson often must meet his teammates on the THS cross country team early on Saturday morning to travel to a meet in another part of the state.

Johnson’s long hours on Fridays and Saturdays are a snapshot of the dedication the high school sophomore shows to his sport throughout the whole year. Because he participates in cross country and on the outdoor track team, Johnson is either participating in or training for a season nearly every month of the year.

Running has been a passion for Johnson since he went out for the Thompson Middle School track team in seventh grade. A year later, he earned a spot of the THS cross country team, and was running against varsity athletes from all over the state.

“My parents encouraged me to go out for the track team because they knew it would be my sport,” Johnson said, noting he is looking to run in college after he graduates from THS.

“It instantly clicked with him. It was an overnight thing,” J.D. Johnson said. “Now, he will be out running before we even wake up some days. You don’t see that kind of work ethic with a lot of kids today.”

“He (Hamaker) gave me a great run. I respect the way he came back on me toward the end,” Johnson said. “They are a really good team.”

Johnson said THS had lost some respect from its competitors over the past several years, but praised his teammates and coaches for making a comeback in the sport.

“We have gotten so much better over the past two years. We’ve grown in numbers as well,” Johnson said. “Coach Anderton is really experienced, so he knows what he is talking about. He knows what it takes to make us better.”