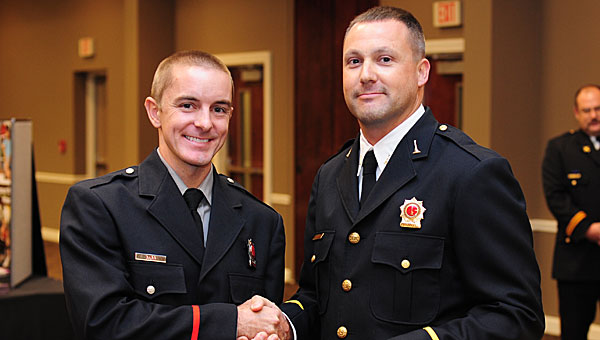 Thirteen officers and firefighters from a multitude of Shelby County agencies received thunderous applause Oct. 19 at the Pelham Civic Complex as they were honored for their service during the past year.

Representatives from 12 agencies presented their Officer of the Year and Firefighter of the Year awards during the Greater Shelby Chamber of Commerce annual Safety Awards Luncheon.

Chelsea Fire Chief Wayne Shirley named Marty Land the department’s Firefighter of the Year, and said Land has helped to keep the department’s equipment in good condition over the past five or six years.

“He is a firefighter we can count on to get the job done,” Shirley said of Land. “He really is an asset to our department and our community. I consider it a pleasure to work with him.”

Shaun Barr was named the Alabaster Firefighter of the Year for what Alabaster Fire Department Lt. Jim Golden said was an “extremely positive attitude.”

“In addition to superior performance, one of the things that makes him so special is his disposition and positive attitude,” Golden said. “Shaun’s attitude makes everyone in our department a better firefighter.”

“He allowed himself to continue his education, and he brought that training back to the department,” McCurry said.

Patrick Coleman was named the North Shelby Fire and EMS District Firefighter of the year for his tireless work ethic.

“He is someone who exemplifies a can-do attitude,” said Chief Michael O’Connor. “When you look at him, you wish you had some of his blood because he constantly goes all day long.”

“He has a deep-seeded concern for the physical and spiritual well-being of firefighters and the community as a whole,” Kendrick said.

Daniel Mills was named the Helena Firefighter of the Year for his work with the department’s explorer and volunteer programs.

“Not only is he a pleasure to work with, he and I have become very good friends,” said Helena Fire Department Capt. Brian Ryder. “Any situation you are put in, you want to have him by your side.”

Shelby County Sheriff Chris Curry named Kevin Hand his Deputy of the Year for helping to save a person’s life during a Montevallo house fire.

“He discovered the house was on fire, but he was not able to locate the people at the residence,” Curry said. “He entered the residence and found one person unconscious from smoke inhalation and carried them out. His actions that day unquestionably saved a life.”

Matt Mellen was named the Chelsea Citizens Observer Patrol Volunteer of the Year.

“He has helped to stage a ghost car with a dummy in it, and he helped us get a radar system,” said COP Deputy Director John McMunn. “It gives me great pleasure to honor him today.”

Pelham Police Chief Tommy Thomas named Richard Strickland the department’s Officer of the Year for his work on a human trafficking case and for his arrests related to a nationwide crime organization.

“He is a professional police officer, and he has the tenacity of a bulldog,” Thomas said. “He works the bad stuff that a lot of us like to pretend doesn’t exist.”

Alabaster police Lt. Mike Jones named Paul Johnson the department’s Officer of the Year for his professionalism during the city’s first double-homicide in July.

“To see him come in and remain professional at a scene where there was no other word for it but horrendous was amazing,” Jones said. “He performed above the standard.”

Clayton Smith and Matthew Staggs were named the Calera Officers of the Year for their help recovering the body of a drowned toddler in Mt Laurel.

“They stepped in knowing the stress and danger that would be involved that day, and they did it anyway,” Calera Police Chief Sean Lemley said. “They put the victim’s family’s needs before their own needs.”

Philip Richards and his K-9, Bak, were named the Helena Officers of the Year for their work in the community.

“(Richards) joined the Helena Police Department in 2002, and he has been an asset to us ever since,” said Helena police Lt. Ivy Penhale. “He is an outstanding officer.”

By NEAL WAGNER / City Editor A 4-year-old Columbiana girl was killed and her 28-year-old mother was injured after their... read more