Police gear up with Cold Fire 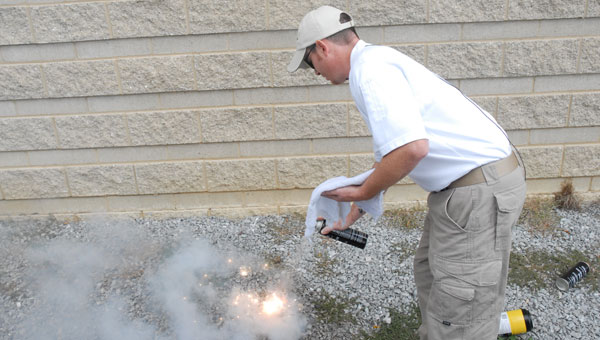 Pelham police officials said they soon will be able to “stay in the fight longer” when dealing with fire-related incidents after the department outfitted all of its patrol vehicles with a new type of extinguisher.

Police are in the process of equipping every Pelham Police Department marked vehicle with fire extinguishers from the Pelham-based Cold Fire company.

The company’s extinguishers use a plant-based compound to instantly put out blazes, cool hot surfaces and create a heat barrier around anyone or anything trapped in the fire, said Cold Fire Southeast employee Justin Partridge.

Partridge said Pelham is one of the first departments in Alabama to adopt the extinguishers for its fleet, and demonstrated the product for officers by extinguishing a magnesium-fueled fire and by holding a blowtorch to his Cold Fire-coated arm.

“If you had a vehicle fire, this stuff would allow you to spray the door handle and then open it bare-handed,” Partridge said while visiting the department Oct. 19. “I don’t care if I make one dollar off this. If I help save one life, it will be worth it.”

Pelham police Capt. Larry Palmer said he was “tickled to death” to equip the fleet with the new extinguishers, and said the product could have helped him save lives in the past.

Palmer said one of the first wrecks he worked after becoming a police officer involved a driver trapped in a burning Ford Pinto.

“By the time we got the fire out, the only thing left was the skin on the tip of the victim’s fingers where they were trying to open the door,” Palmer said, noting the scene still haunts him today. “I’m not saying this stuff would have saved that person, but I would have felt a lot better if I had it that day.”

Palmer said police officers often arrive on the scene of emergencies before firefighters, and said sometimes a few seconds can be crucial to saving a victim’s life.

“At least with this, we could coat someone down if they were trapped in a fire to give them a higher chance of survival,” Palmer said. “It cools everything it touches, so that allows us to get closer and stay in the fight longer.

“When we first saw this stuff, we put it on the department’s wish list,” Palmer added, noting it cost about $6,000 to outfit the fleet. “We just kept saving until we could get it for every car.”