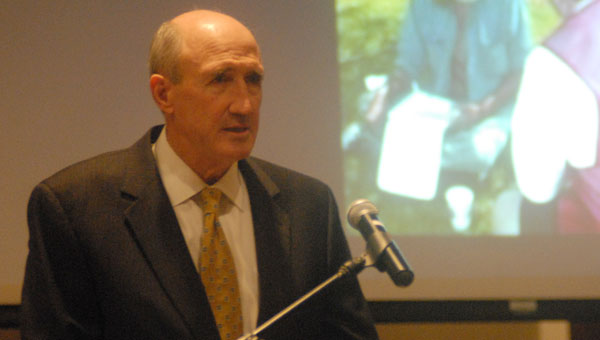 A former Auburn University and Miami Dolphins football great praised the work of the Shelby County Salvation Army Oct. 20 during the organization’s annual banquet at the Pelham Civic Complex.

Mike Kolen, who played for the Tigers before he was drafted to play for legendary Dolphins coach Don Shula in the early 1970s, spoke highly of the Shelby County agency and outlined the Salvation Army’s successful characteristics.

Kolen, whose nickname is “Captain Crunch” because of his hard-hitting football style, said the Salvation Army has been successful because it shares many traits with championship football programs.

Kolen, who currently lives in Birmingham, said inspiration is an important part of being successful, and said it comes from living a Christian lifestyle.

“If a group of men are focused on the same goal and the same mission, they are inspired. Shula had a knack of being able to inspire his troops,” Kolen said. “With God’s spirit in our life, we can begin to live a life that’s truly inspired.”

Kolen also said successful organizations have high expectations for themselves.

“Within our undefeated world champion 1972 season, there was a sense of expectation. Don had us ready to go every week, and we became expectant of winning,” Kolen said. “That expectation is so key if we are going to be champions in life.”

Kolen said the most important trait for a successful organization is motivation.

“The greatest motivation we had was the love and respect for our teammates and our coaches. We cared for one another,” Kolen said. “When I look at the Salvation Army, I see an organization that’s foundation is inspiration, expectation and motivation.”

Salvation Army Corps Officer Sgt. Andy Bailey said the organization is preparing to enter one if its busiest season, and encouraged everyone at the dinner to help make an impact in the county.

“We need your help. We need volunteers, we need people to adopt angels so kids can have a Christmas,” Bailey said. “As we go out that door, we go out to a community in need and a county in need.”