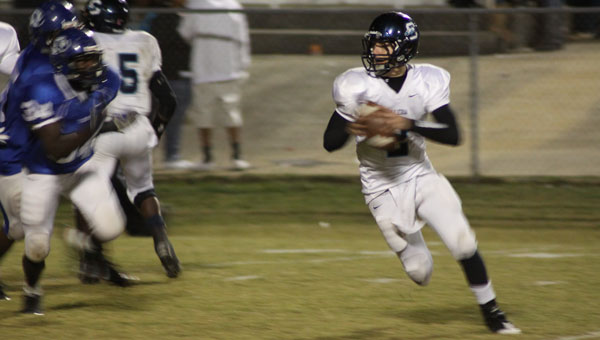 Calera High School wrapped up Alabama High School Athletic Association Class 4A, Region 3 play with a 39-22 win over Childersburg on the road in its final region game Oct. 20.

The Eagles, who erased a 14-13 deficit at halftime, racked up 319 yards of total offense in the victory.

“I’m wanting to get back on a winning streak,” Hyde said. “It’s my senior year. I want to go out with some wins.”

Following a rushing touchdown by Childersburg in the first quarter, Calera senior Jeremy Hyde broke free up the middle of the field for an 80-yard touchdown run to put the Eagles on the scoreboard with 6:04 remaining in the opening quarter. Sophomore Stephen Ellison added the extra point to tie the game at 7-7.

The Eagles (3-6 overall, 2-5 in Class 4A, Region 3) took a 13-7 lead following a 1-yard touchdown run by junior Sam Adams with 8:47 remaining in the second quarter. Childersburg blocked a punt by Hyde and returned it for a touchdown to carry a 14-13 lead into the locker room at halftime.

Calera regained the lead following a 22-yard touchdown pass from Zack Reneau to Hyde with 9:08 left in the third quarter, which gave the Eagles a 19-14 lead. Childersburg added a touchdown with 6:42 remaining in the quarter to take a 22-19 lead, its last of the game.

Following a long pass play from Hyde to Reneau following a reverse handoff from sophomore Ronnie Clark to Hyde, Reneau threw a 2-yard touchdown pass to Hyde in the flat with 3:52 remaining in the third quarter to give the Eagles the lead for good. Ellison added the extra point to give Calera a 26-22 lead.

Reneau threw a 7-yard touchdown pass to Clark in the corner of the end zone with 8:20 remaining in the game, which pushed the Eagles’ lead to 32-22.

Calera melted the clock late in the fourth quarter with runs by Clark and Adams before Reneau tossed a 5-yard touchdown pass to Hyde with 49 seconds remaining in the game. Ellison added the extra point for the final point in the game.

Adams rushed for 82 yards and a touchdown on 20 carries. Reneau completed 15-of-19 passes for 129 yards and four touchdowns.

“This team is still working and getting better,” McKeller said. “That’s what you want to see.”