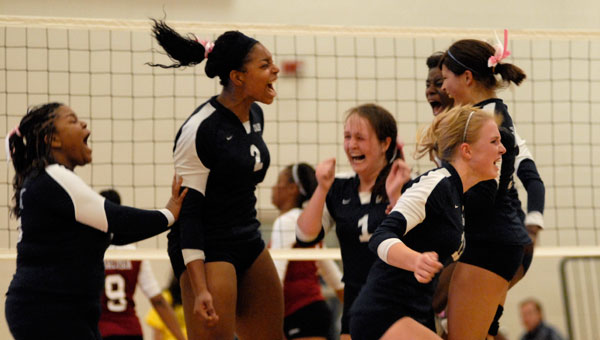 Rasmussen, who couldn’t hide her joy after the Eagles clinched their first trip to the Alabama High School Athletic Association Class 4A Elite Eight in school history following a 25-23, 28-26, 25-19 sweep of Andalusia in a Class 4A sub-state match Oct. 20, didn’t sugar coat her feelings about her first year on the team as an eighth-grader.

“It was not even fun,” Rasmussen said.

Fast forward five years to present day, and Rasmussen said she wouldn’t change anything about her high school volleyball career. 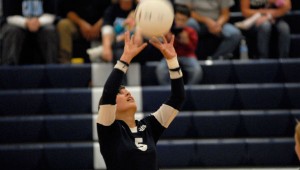 “(Advancing to the Elite Eight) makes me feel very accomplished,” Rasmussen said. “I think we deserved everything we accomplished.”

Calera will face Wilson in a Class 4A quarterfinal match Oct. 26 at 3:30 p.m. at the Pelham Civic Complex.

Calera coach Amanda Lewis, who has taken the Calera program to its first Elite Eight in her fourth season at the helm, said she saw the puzzle pieces in place for success despite plenty of adversity in her first season in 2008.

“I had a lot to work with,” Lewis said. “The biggest challenge was getting the girls to accept a new coach and a different style. Getting everybody on board. Every year we’ve progressed. We’ve kind of set the tone for the volleyball program here and what is expected.”

Rasmussen, who suffered a torn anterior cruciate ligament in her knee in the spring and was cleared to return to the court one day before the season began, played a key role in getting the offense started against Andalusia with a team-high 14 assists.

Sophomore A’Kia Harris led the Eagles (28-12) with 11 kills in the victory. Harris also posted four blocks and a team-high 17 digs.

The Eagles jumped out to a quick lead in the opening set following three consecutive service aces by Rhinehart.

Harris recorded a pair of kills late in the set before clinching a 25-23 win in the first set for the Eagles with her block on an Andalusia attack on the final point.

The Eagles trailed throughout the second set before storming back from a 23-17 deficit late in the set. After an error gave Andalusia a 26-25 lead, Rhinehart, Harris and Ryan recorded consecutive kills to lift Calera to a 28-26 win in the second set.

Harris recorded two kills and a block late in the third set to help the Eagles clinch a sweep with a 25-19 win in the final set.

Rasmussen said she couldn’t have dreamed of reaching the Elite Eight during her career in her first season with the Eagles. Now that it’s a reality, Rasmussen and her teammates soaked up the congratulations being tossed around following the match that earned them their first trip.

“I’m glad to see this program at that level,” Rasmussen said.