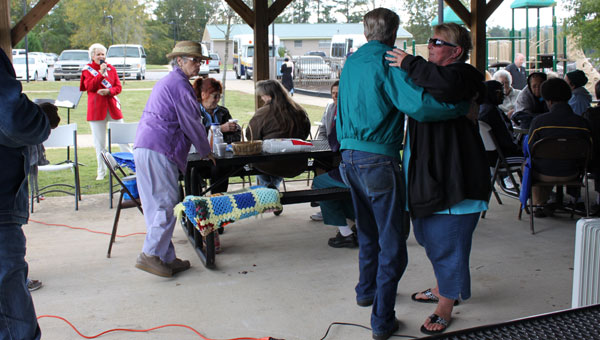 Edwina Chappell, in red, sings "Stand By Your Man," as Calera's Nicky Ingram and Bo Robertson dance in time to the music. (Reporter photo/Christine Boatwright)

WESTOVER – About 60 senior adults braved the cold and enjoyed Westover’s fifth annual Music in the Park event on the morning of Oct. 19.

Annette Tyler, the volunteer director of Westover’s senior adults, teamed up with Harrison Regional Library in Columbiana to invite senior adults from senior centers across the county. Seniors from Vincent, Westover, Columbiana and Calera attended for a morning of food, fellowship and musical entertainment.

Westover native Channing Coker kicked off the musical performances. Former Ms. Senior Alabama Edwina Chappell, also from Westover, then took over, asking the crowd to sing with her, which they responded to enthusiastically. The Sylacauga-based band The Roadkills  finished up the musical section.

“I think it’s awesome,” Westover Mayor Mark McLaughlin said. “Our city council members,  Annette Tyler and Jeanne Champion Fisch, are actively involved, and it’s grown a lot over the past four years. It’s good to see everyone having a good time with each other, and we’re proud to host it.”

“They love it so much, and they look forward to it every year,” Simmons said.

“My district used to cover part of Westover, but with the redistricting, I’m not sure that it does now,” he said. “But these are my people.”