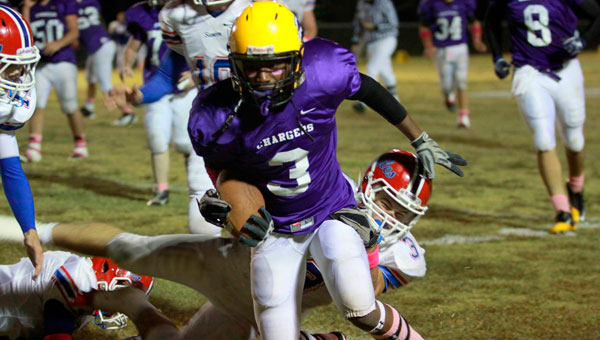 COLUMBIANA — For three quarters, Cornerstone Christian School and Sumter Academy traded scores as the Chargers carried a 35-28 lead into the fourth quarter Oct. 21.

However, the fourth quarter would not be kind to the Chargers as the visiting Eagles outscored Cornerstone Christian 16-0 and the Chargers fell by a final score of 44-35.

Cornerstone Christian was in an early hole as Sumter Academy drove the length of the field to take an early 6-0 lead.

The Chargers bounced right back as quarterback Adrian Young threw the first of his four touchdown passes as he hooked up with B.J. Smith for a 56-yard touchdown pass. Sterling Reither’s extra point gave the Chargers a 7-6 lead at the end the first quarter.

After Sumter Academy stretched its lead to 14-7, the Chargers bounced right back with an impressive 15-play, 75-yard touchdown drive. The drive resulted in Young throwing a hail mary pass with no time on the clock to B.J. Smith, who wrestled away from an Eagle defender for a touchdown.

The drive featured three fourth-down conversions for the Chargers and Reither’s kick tied the game at 14-14.

Sumter took the second half kickoff and marched 59 yards on four plays to take a 20-14 lead. Cornerstone Christian matched Sumter’s score as Young found Ronezz Stevens in the flat and Stevens took it 77 yards for a touchdown.
Reither’s extra point gave the Chargers a 21-20 lead.

Young recovered the onside kick and the Chargers drove 48 yards on 10 plays to take the lead.

After Sumter Academy tied the score at 28-28, the Chargers came right back
on a Stevens’ 15-yard touchdown run up the middle. Reither’s kick gave the Chargers their last lead of the night at 35-28 with five seconds remaining in the third quarter.

The fourth quarter belonged to the visiting Eagles as they would add two touchdowns to put the game out of reach.

The loss drops the Chargers to 5-3 overall and 3-3 in region play.

Offensively, the Chargers were led by Young, who passed for 248 yards and four touchdowns. Stevens carried the ball 11 times for 76 yards and a touchdown.

Defensively, Cornerstone Christian was led by Clayton Halbert with 11 tackles and a fumble recovery. Smith finished with 10 tackles.

The Chargers close out the regular season Oct. 28 with a trip to Ashford Academy before traveling to Crenshaw Christian Academy the following week in the opening round of the Alabama Independent Schools Association Class 1A playoffs.