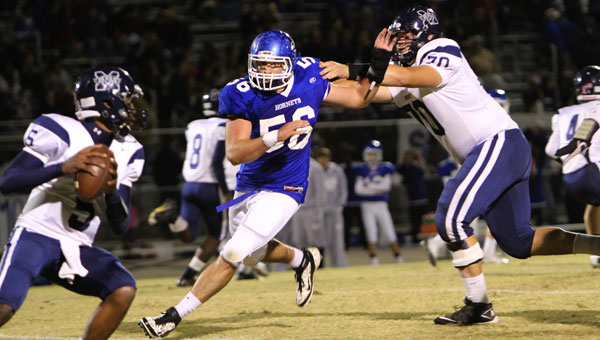 CHELSEA — After giving up a fumble two plays into the game, the Chelsea Hornets answered back with a huge win over the Moody Blue Devils 42-20 on senior night Oct. 21 to secure a spot in the Alabama High School Athletic Association Class 5A playoffs.

After giving up an early turnover, the Chelsea defense stood strong and stopped the Blue Devils on fourth down to take the ball back.

After a nine-play, 74-yard drive, quarterback Jake Ganus found the end zone for the first score of the game and gave the Hornets an early lead. After another defensive stop, the Chelsea offense took the field once again.

This time, it only took four plays for Ganus to find the end zone from 65 yards down field. He broke a few tackles at the line of scrimmage and followed a few key blocks down field, and let his moves do the rest as he weaved in and out of defenders to finally get into the end zone for the second Chelsea touchdown of the night.

Moody answered back on the next drive. Six plays in, Michael Barron floated a pass to a wide open Rodrellas Garner for a 62-yard touchdown, which cut the lead in half.

On the next Chelsea drive, a few long passes from Ganus got his team into the red zone. This time, running back Austin Washington found the end zone from 13 yards out to to give Chelsea a 21-6 lead.

After giving up a huge defensive play on the last drive, the Chelsea defense answered back with two three-and-outs back-to-back to get the ball back for the offense.

Chelsea’s next drive ate up most of the clock in the second quarter, as the Hornets took the ball 75 yards down field and Aki Coles ran it in to give the Hornets a 28-6 lead over the Blue Devils.

After another defensive stop, Chelsea took the ball back with very little time left in the half, but the Hornets wanted one more score before they headed into the locker room. Starting the drive from midfield, a long pass from Ganus put them in a perfect scoring position. Two plays later, Ganus threw a 6-yard touchdown pass to Washington with 17 seconds left in the half to give Chelsea a 35-6 lead at halftime.

Moody took the ball first in the second half, but still couldn’t get much going. After being forced to punt once again, the Chelsea offense took the field.

With the game in hand, a few of the younger players on the team got a chance to take the field. Chelsea ate up more than eight minutes in the third quarter with the Hornets’ first drive as Matt Mann led the offense down the field. Chelsea finally found the end zone with a pass to Matthew Graben, which gave the Hornets a 42-6 lead on Chelsea’s final touchdown of the night.

The young defense gave up two more scores to the Moody Blue Devils, but held strong for the victory.

“We’ve really challenged our kids the last two weeks to get better and stay focused,” said coach Wade Waldrop. “We’ve got two weeks to improve before we go play a big one that could send us home.”

Chelsea finished the game with 416 yards of total offense, with 295 of the yards coming on the ground.

The Hornets improved to 6-3 on the season as they head to Oak Grove for their final regular season game Oct. 27.

Spain Park High School running back Sean Mardis looks for an opening in the Thompson defense in the Jaguars' victory... read more