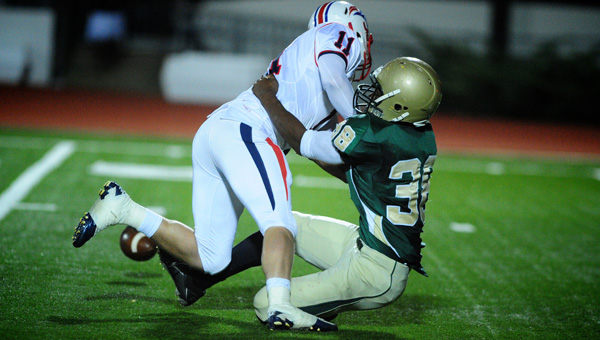 Pelham is now in a three-way tie with Vestavia and Spain Park for the two remaining Class 6A, Region 6 playoff spots after the Panthers downed the visiting Homewood Patriots 23-14 Oct. 21.

“Next week will really be like a playoff game for us,” said Pelham head coach Brett Burnett. “It was a good team effort, and a great win for us.”

After a strong defensive effort by both teams forced a scoreless first quarter, Pelham struck first late in the second quarter on a 4-yard touchdown run by Beall. John Perko’s PAT gave Pelham a 7-0 lead.

Homewood answered on its next drive, scoring on a 5-yard touchdown pass and successful PAT.

The Patriots tied the game again late in the third quarter on a 32-yard touchdown pass and successful PAT.

With a few seconds left in the third quarter, PHS junior Trey Cranford recovered a Homewood fumble on the Patriots’ 7-yard line.

A few plays later, Fletcher Johnson put the Panthers back on top on a 5-yard touchdown run. After Perko’s PAT was tipped and fell short, Pelham took a 20-14 lead.

After forcing Homewood to punt on its ensuing possession, Pelham capped off a 39-yard drive with a 33-yard Perko field goal, giving Pelham a 23-14 lead with just under four minutes to play in the game.

The Pelham defense held the Patriots on their ensuing drive, forcing Homewood to turn the ball over on downs to the home team.

Because Vestavia and Spain Park also won Oct. 21, the three teams must win their Oct. 28 matchups to keep their playoff hopes alive.

“Our defense showed a tremendous effort tonight,” Burnett said. “And our offense made some key plays to keep us on top.”

FROM STAFF REPORTS The University of Montevallo volleyball team defeated Erskine College 3-0 in a neutral-site match Oct. 21 at... read more