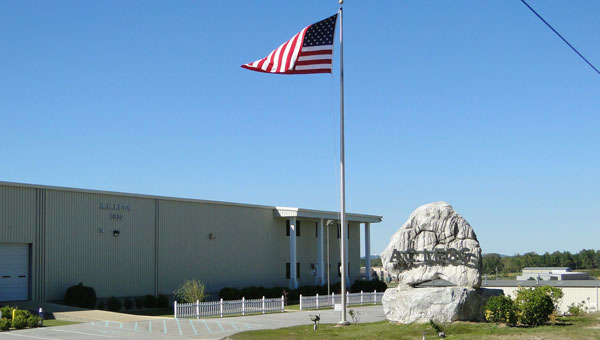 Charles W. Purvis was employed by the company in 1936. He soon became general manager and began purchasing company stock. In 1978 the majority owner, Elizabeth Blanchard, a Calera resident, died leaving Charles the option to acquire ownership of the company.

Charles’s son, James “Jim” E. Purvis, joined the company in 1977. Upon his father’s death in 1988, Jim became CEO/president. Jim’s brother, Charles M. “Bud” Purvis, joined them in 1987 and is vice-president of sales. The company employs 140 people, which include two of Jim’s sons, Jamie and Jeffrey, and Bud’s son, Chuck.

Jim said the company outgrew their Birmingham headquarters by the mid ‘90s.

“It came down to three choices. Sell the business, stay and slowly die or throw the dice on the table and build a new office. We owned 12 acres in Oxmoor Valley, but was still undecided so we looked at this land when we heard Sysco was locating here. We liked the area and interstate accessibility, so we built a 131,000 square foot facility and moved September 10, 2001.”

In addition to the Old Plantation line, the plant produces custom blended seasonings using spices, salt and other ingredients. They create original seasonings or duplicate seasonings for their customers. Outside the U.S. they primarily ship to South America, Jamaica and Mexico.

“When Jim and I were dating, his dad gave me some to try,” Suzy said. “I shared it and my dressing recipe with friends and every year they came back for more. After we got married, I said I’m going to market this stuff, so I took it to craft shows and started a mail order business — The Spice Connection.”

The package touts “goof proof goodness” that “tastes like Grandma’s.” Suzy made her famous dressing for Bill Davis of Sav Mor Food Outlet and me. My family agreed it’s as delicious as grandma’s and a nice change; Davis liked it as well.

In 2009, the seasoning won first place in the best new spice category at America’s Mart Gourmet Food Show in Atlanta. It’s available at Sav Mor Food in Calera, the Raven’s Nests booth at Christmas Village and online at Dressingturkeys.com.

Calera goes pink for the day