Bowling, helping others proves to be good therapy 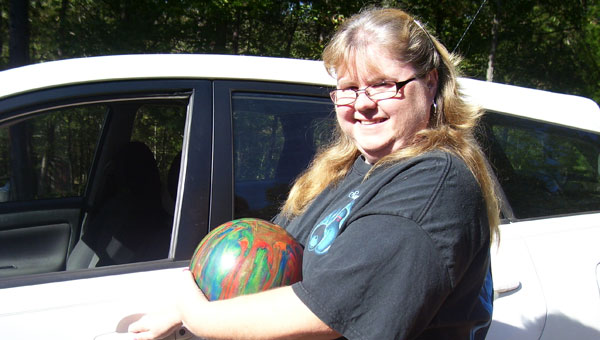 For 15 years, Suzette Newman of Chelsea has continued to bowl once a week through the good times and the bad. For Suzette, it’s not only good exercise, but good therapy and a good stress-reliever. (Contributed)

Every Tuesday morning, Suzette Newman loads two babies — ages two months and 10 months — into her car, grabs her bowling ball and heads for the bowling alley.

The babies are children she takes care of for relatives and friends while they work.

But Suzette “Suzy” and her husband Larry don’t take care of only young children, but teenagers and adults who need a place to live for awhile. They have a small house, which they built themselves, but they can always find room for one more.

Suzette said people at the bowling alley tell her they don’t see how she does it, but bowling and taking care of children — and people — are a way of life for her.

“I bowled for two years in Louisiana, before we moved here (to Chelsea),” she said, “and I’ve been bowling in the league here for 15 years.”

Only once during that time has there been another break in her bowling routine. That was eight years ago, when her 16-year-old daughter, Lacey, died in an automobile accident.

When she went back to bowling after a few months away, she found bowling to be good therapy and a good stress reliever, as well as good exercise. According to Suzette, much of the team is made up of older ladies. One lady bowled until she was 94, she said.

Suzette first began bowling on a team while taking Lacey to bowl in a summer league for kids. A lady with the women’s league said to her, “We need some more women in our ladies’ league. Wouldn’t you like to bowl?”

“Well, sure,” Suzette told her. And she’s been at it every since.

Suzette is on a four-lady team with three women from Jemison — Barbara Wise, Alice Oates and Sherry Henson, with whom she has been bowling for four years, since her previous team dispersed.

Known as “The Alley Kats,” the women are a part of the Ladies Invitational League, which bowls at Brunswick Riverview Lanes off 280 near the Cahaba River. They meet at 9:30 each Tuesday morning.

Suzette and Larry have two sons and three grandchildren, with another on the way.

She can be reached at 222-2852, junebutterfly@netzero.com or on Facebook.

Accelerated Physical Therapy Inc. has four clinics in the area, including one in Pelham and Chelsea. (Contributed) By SHELBA NIVENS... read more