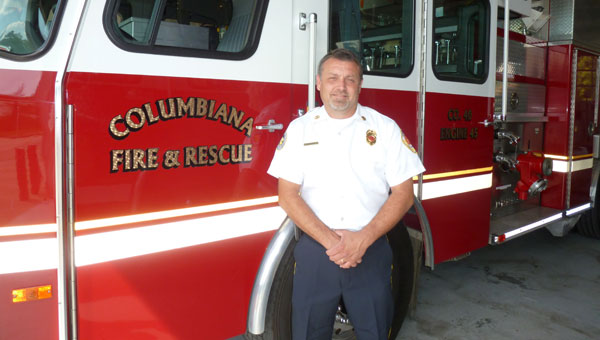 Volunteer firefighters are a special brotherhood. They are owners or employees of banks, concrete companies, Blue Cross/Blue Shield, Children’s Hospital, Shelby County Board of Education or a tire company. They volunteer their free time after work or on weekends because they love what they do – fight fires to keep us safe.

The Columbiana Volunteer Fire Department has 30 firefighters, all volunteer, led by Chief Johnny Howard and Assistant Chief Jerry Lamb. Columbiana funds their equipment: six engines, two rescue trucks and three administrative. Chief Howard grew up in Columbiana, the son of Johnny Sr. and Sara Howard. He graduated from Shelby County High School in 1984 where he worked half days through the Career Trade Program at Howard Tire Co., the family business. He has been married 26 years to his high school sweetheart Pam Atchison Howard, and they have three children: Johnny III “Trey” and twins, Jacob and Haley, age 11.

Howard grew up in the fire department. His father joined in 1967 and was assistant chief for many years. Howard became a firefighter in 1986, assistant chief in 1987 and chief in 1991 at age 21, a position he has held for 20 years, which is voted on by his peers every two years and approved by the mayor and City Council. Howard’s brother, Ricky, joined the fire department in 1988, and son Trey recently joined in June 2011 after graduating co-valedictorian of Shelby County High School.

Howard leads the department from experience — more than 240 hours of training, which was taken in his “free” time to receive his Firefighter II certificate. He also is an EMT/paramedic. Howard has helped create a class so that the fire department can do continuing education as a group.

The largest industrial fire that came under Howard’s watch was the Summer Classic fire in 2004. Howard organized more than 144 firefighters, 14 departments, 3 agencies that took six hours to get the fire under control and three days to put out. Other catastrophic events that the department remembers working were the Gaston Steam Plant fire and the winter storm of 1993.

“Our job as firefighters is to provide good service in the safest environment as economically as we can,” said Howard. “Our goals are to educate, prevent and protect. I have great pride to be the leader of this great team. To make a difference and to know you make a difference, that is what keeps you going.”

Columbiana is proud to have the Columbiana Volunteer Fire Department protecting our community with Chief Howard at its helm.