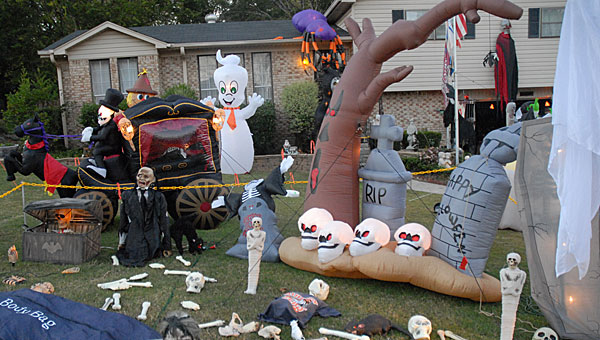 For years, the neighbors, who live on David Drive off Bearden Road, have spent countless hours collecting enough decorations to create a steady glow on the street in the days leading up to Christmas and Halloween.

This Halloween is no different, as the lots surrounding their houses are flanked by everything from fake graveyards to inflatable haunted houses.

Phillips, who originally started collecting Christmas decorations decades ago, eventually allowed his passion for holiday decorating to spill over into October. Over the past several years, Phillips has been adding to his collection of hundreds of items and attempting to get as many decorations as possible into his front yard.

“I usually wait until after the Halloween season and then go and see what’s on sale. I will go and buy it and save it for next year,” Phillips said. “When I was getting my stuff out last week, I found two things I forgot I bought last year.

“It takes me at least a week to put everything up,” Phillips added.

When Phillips begins assembling his Halloween ensemble, Palma can be seen doing the same thing across the street. Though the two houses sport enormous Halloween displays, the men said they don’t compete with each other seriously every year.

“Our neighbors all think it’s a competition, and that’s fine,” Palma said with a laugh. “He has more inflatables than I do, but I think I have more props.”

“I always tell Tony I’ve got him beat on Christmas, but I think he’s got me on Halloween,” Phillips said.

Because the two yards feature some potentially scary Halloween elements, Phillips and Palma said they typically have separate sections of their yards for different age groups. For instance, one half of Phillips’ yard is geared toward fun for younger guests, and the other half features scary thrills for the older visitors.

Phillips said the centerpiece of his yard is the inflatable haunted house. Some of Phillips’ neighbors sometimes dress as props and sit motionless inside the house before springing to life to terrify trick-or-treaters.

“One time I had a friend go through the house and look at the guy (disguised as a prop) four or five times,” Phillips said with a laugh. “When the guy jumped up at him, he nearly tore the haunted house down trying to get out.

Both Halloween yards will be completely assembled by the end of the week, and will be in full swing on Halloween night.

“We just want to give kids a neighborhood where they know they can go trick-or-treating on Halloween,” Phillips said.

FROM STAFF REPORTS The University of Montevallo volleyball team evened its season record with its fourth-straight sweep Oct. 25 at... read more